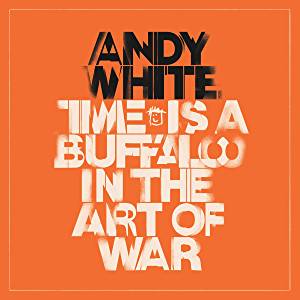 Andy White
Album: Time Is A Buffalo In The Art Of War
Label: Self Released
Tracks: 9
Website: http://www.andywhite.com


I can't remember that last time an opening song stayed with me throughout the rest of the album and continued through into my day. In "Last Train", White has produced one of the earworms of 2019, with its hugely catchy chorus and recurring guitar riff. It's a bit like listening to a Sisters of Mercy track without the assault. At 8 minutes long I shouldn't have wanted to put this on repeat, but that's how it made me feel. "If you have a lot to say take all the time you want to say it".

None of this should be a surprise. Andy White has worked with some of the world's best songwriters and has a thirty year back catalogue of twenty albums. Lyrically "Last Train" pulls no political punches "Years of abuse and a nothing excuse / From a man in a suit who told him / He'd never get lucky" and is a commentary on the current state of the nation. The sombre opening mood of "The Shit Hits the Fan" captures perfectly its subject matter. It's Lennon & McCartney style seems to enforce the song's lyrical credentials "Where's the plan / For when the shit hits the fan".

"Running Round in Circles" (also the title of White's September 2019 EP) kicks off with a punchier sound generated by a lap steel guitar, and maintains a relentless pace. "One in a Million" begins with jazz blues piano and upright bass that lulls you into a false sense of sleazy blues bar before it takes on more of a driving sound, with a Steve Earle quality to both its lyrics and overall sound. Musically this feels like a reprise of "Last Train".

"Friday Night" seems to reflect on glories of past live performances and the music influences that led from there to the present day: "a future in British Steel" being a reference to XTC's "Making Plans for Nigel". This song drives along at a fast pace and seems to reconfirm the trademark sound for this fine album. "Rock and Roll will never die".

"Fire Engines Blue Trains and Trucks" is for me the stand out track on the album. It's dark, reflective, but carries a realism we all need to note. Humankind has created all of its own problems and has a responsibility now to resolve them. The innocence of childhood doesn't last long in today's world and we are quickly exposed to the problems of our own making: "Haven't we all had enough / Of religion corruption and drugs".

With its Waterboys quality, "Fly If You Want To" is as close to a love song as this album gets, with its main message being that we all have choices to make and that neither is necessarily right or wrong. We all make decisions that we will either regret or comfort us. By contrast, "Armageddon #4" is its most obvious protest song: "They don't care they don't listen to anyone / till the last tree in the very last forest falls". There is however light through the darkness, carried by a Lennonesque list of human beings who have in our lifetimes carried messages of freedom and hope.

The highly effective but lyrically sparse "Everyone's Gone To France" brings the album to a hopeful conclusion. It's rather beautiful. "Time is a Buffalo in the Art of War" requires a deep listen. Its shortest song is 4 minutes 37 seconds, but each has its own message within a mood of reflection and melancholy that few songwriters are able to achieve.