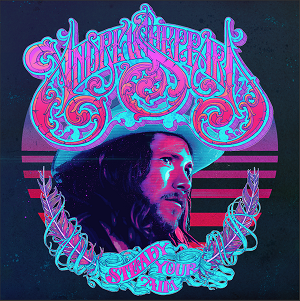 
Born and based in Idaho after a stint in L.A., a blown knee meant skateboarding's loss proved music's gain, this, his second album, a conceptual musical journey that opens with the invitation to 'Take A Walk With Me', an organ-backed Band-like number about packing his bags to take "a swing at the open road" and moving back to the mountains.

That's thematically followed by the title track, a song about the trials and tribulations of being a travelling musician, being "flat broke and low on gas" but still making your mark, only the dog back home not kicking him when he's down.

A more uptempo, rockier number with a chugging rhythm line, 'Red Wine & White Roses' addresses a crash and burn romance, being better to go up in flames than have the spark splutter out. Equally punchy, 'Here At The Bottom 'is rocking outlaw country about having to eventually pay the piper riding a twangy guitar bronco, heading into country noir territory on the desert wind moan 'Travel Light and Carry On', another tale of life on the road.

With songs like the Guthrie-like 'Standin' Tall' setting the line "if you turn your back he'll surely rob you blind" against "if you're down on your luck, he'll trade a dollar for your dime", the album offers a lyrical balance of the sweet and the sour, the harmonica blowing 'Not My Kind' a nasally sung Dylan-ish protest song rejection of those who think you have to act "so goddam proud" to be a man.

There's no weak tracks here, but the gutsy 'Lies As Cheap as Whiskey' is particularly potent with both its muscular guitar and the bare-knuckle lyrics about hiding from life inside a bottle.

It's duly followed by the drunker carousing waltzer 'Holy Water', a John Prine-like musing on finding peace of mind before death finds you that comes with a moody twang guitar solo, the album closing on a stripped-down note for the single acoustic old school fingerpicking country blues of 'Further Away', a tribute to a deceased friend who, not really gone, "just further away" remains a guiding inspiration.

Sheppard's working in a very crowded field, but this amply indicates he has the potential to carve an acre of his own.

Here At The Bottom