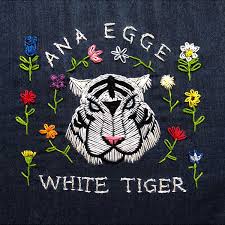 
With her last two albums, Bright Shadow and Say It Now, the latter recorded with The Sentimentals and featuring the stand out ‘He’s A Killer Now’, I was of the opinion that Egge was on the verge of a major breakthrough. So, it was something of a disappointment when, listening to her latest, I wasn’t immediately blown away. Considerably more laid back than those preceding albums, it’s a decidedly mellow affair that doesn’t leap out at you. However, persistence and repeat listenings slowly unfold its charms as the songs and characters explore her free-spirited childhood, motorbike romances and the urban experiences of a young lesbian cautiously venturing into the scene and a mother serenading her daughter. The Sentimentals aren’t around for this one, but her collaborators do include producer and multi-instrumentalist Alec Spiegelman, who co-wrote three of the songs, Grammy-nominated bassist Jacob Silver and, on backing vocals, Anais Mitchell.

Dropping recontextualised references to the Velvet Undergound (“Waiting on my man, waiting on sweet Jane”), it opens with the slightly Vega-like airy guitar jangle and brass of ‘Girls, Girls, Girls’, the narrator and her best friend cruising New York’s Chelsea streets eyeing up the gay boys and lesbian girls. The crooningly sung, softly shuffling title track follows, written as an encouragement to a friend needing strength to make it through adversity, Spiegelman lending flute to its spirit guide theme, sliding into the romantic love song ‘Be With You’ softly kissed by saxophone.

Built around the bass line, tumbling chords and a persistent bubbling synth, flushed by clarinet, ‘You Among The Flowers’ offers memories of a past crush (“You remind me of a woman I once knew”) while the present takes hold on the chugging drums-led rhythms of the joyfully sung mother and daughter ‘Dance Around The Room’ breaking out into a swirly synth and keys bridge before closing on pizzicato violin.

Clarinet sets the scene for the sensually languid I’m Goin’ Bossa Nova as she’s visually seduced by the “Lady with the healthy tan” and Latin dance moves and then it’s back to past memories for the folksy strummed and fiddle coloured ‘Last Ride’, sounding like a softer Lucinda Williams as she recalls borrowing her uncle’s motorbike and heading down Interstate 5 to Big Sur to collect her broken down truck on what turns out to be a last ride with her lover.

Referencing Scorsese’s 1974 Alice Doesn’t Live Here Anymore, Western Movie draws parallels with her own freewheeling adolescence (“You’re Tommy and I’m Audrey, I’m a misfit/But I am kind and I am a good friend”) but also sings of letting go and moving on. She’s joined by Billy Strings for a lovely, retro summery sway through John Hartford’s ‘Tall Buildings’ accompanied by Alex Hargreaves’ violin and again catching the lightness that pervades the whole album, finally ending with the not quite two-minute ‘Let The Light In’, a hymn of healing and cleansing yourself of recriminations, enabling friendship to replace resentment and regret.

Having spent more time in its company, I realise my initial reaction was short-sighted. This may not have the immediacy of its predecessors, but delivered with a relaxed, easy going self-assurance and gentle breeze, it may prove her most enduring.