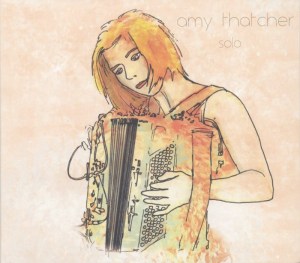 
Amy Thatcher will be a familiar name to many, a member of the excellent sextet The Shee, Kathryn Tickell and The Side and Monster Ceilidh Band. Her distinctive accordion playing and excellent clog dancing have wowed many an audience at festivals and ceilidhs for many years. Now, Amy is stepping out on her own with her debut solo album. Solo is just that, showcasing the multifaceted nature of the accordion. It's a whole band in one instrument, capable of accompanying beautiful melodies and creating its own contrapuntal interplay all on its own.

Throughout the album there are lots of minimalist influences, repetitive motifs that change and alter subtly creating a mesmeric sound. This is true of opening track Laburnum that uses these passages to bridge some very catchy melodic moments above a syncopated bass line that creates some lovely cross rhythms. This is a fantastic contrast to the following track April's Child, written for a bandmate's baby. It is a lilting lullaby with a softer texture, perfect for rocking a little one to sleep. The subtly varying accompaniment keeps the listener engaged with a beautifully simple tune. Sleep Spindles features the only tune not composed by Amy, a lively number with some nice jazzy chords in the accompaniment that has an interesting transition midway, changing key and time signature to another of Amy's tunes, Zakopane Christmas.

Several of the tunes on the album are either dedicated to friends or transitions in life. Ian's Favourite is dedicated to Ian Lowthian. Both the tune and accompaniment have a rolling motion, often in contrary motion to one another. Jo Lin is dedicated to a close friend and is a high energy jig while Falling Near is for those friends who, even when you don't see them, are always close to you. An interestingly angular tune sits above a rich texture, underpinned by a gentle supporting bass. Again, there is a oscillating accompaniment figure that maintains a sense of movement throughout the track, becoming more prominent and growing in intensity during the central section before dying away again.

Study One and The Last Dance were both written during Amy's time at Newcastle University. Study One was originally a piano exercise and features some interesting harmonic progressions, cross rhythms and voice leading. The Last Dance is another richly textured track, utilising the versatility of the accordion. Starting off with a thick chordal accompaniment and a slow, reflective tune, the tempo increases to turn the same tune into something uplifting and exuberant with a pulsing syncopation in the accompaniment. The album finishes with Stomping Clog, another lively track with some foot percussion to maintain a sense of drive and momentum.

Solo is not an album to have on in the background or to listen to in the car because you risk missing the intricacies within each track. Amy has weaved together a complex sound world that demands the listener's full attention. A must buy album for all accordion enthusiasts, or anyone wanting to lose themselves in music inspired by family, friends and life's ever changing journey.