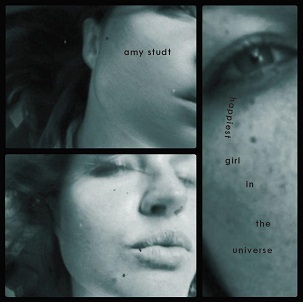 
In June 2003, Misfit, the second single to be released from Amy Studt's debut album, climbed to number 6 in the UK charts. Managed by pop maestro Simon Fuller and signed to Polydor Records, the future for Amy looked bright. Yet the song's title, and perhaps even the album title, False Smiles, can now, with the benefit of hindsight, be viewed as coded confessions from a troubled adolescence.

Her second album, My Paper Made Men, failed to chart when it was released five years later on Fuller's '19' label. Under a false name she toured with Razorlight as she battled stage fright and the fallout from having been so firmly in the pop limelight. Now, almost sixteen years after the release False Smiles, Amy Studt is back. But has she, as the new album suggests, become the Happiest Girl In The Universe, or is its title an ironic statement from a still-tortured soul?

A setlist from her appearance at the 2014 Isle of Wight Festival reveals that she performed eight songs that day which have now finally made it onto this new album. How close are they to the versions she sang at Seaclose Park five years earlier? Well, perhaps only Amy and those present at the festival will know for sure, but this finished work, recorded with Toby Kidd of London indie outfit Hatcham Social, contains certainly the most polished, personal and proficient songs that she has ever delivered. Her voice has acquired a cinematic beauty - breathy and yet with a clarity that touches the heart with an intensity and honesty borne out of pain, hope and redemption. It is a collection that would nestle comfortably alongside classic albums from Scott Walker or Joni Mitchell, and could legitimately be placed alongside works by Tori Amos, Imogen Heap or Regina Spektor. Angst and suffering are mainstay components within many a songwriter's toolkit, and to touch the soul of the listener, it becomes necessary to share that pain via an unselfish honesty and openness that goes beyond brave, and almost defies belief. This is certainly one such album.

I Was Jesus In Your Veins displays a diaphanous dynamic which harnesses powerful forces in countering its fragile opening of 'little drops of honesty, too quickly tumbling out'. Sleepwalker, which was written during the London riots and describes finding salvation against a backdrop of violence and fear, contains tortured cries of 'pack up your windows ...in the city tonight'. A resolute determination in Let The Music Play dwells on the harsh lessons learnt and the still raw memories to positively challenge the experience - 'I paid my dues, I played it your way' points a finger firmly at the svengalian music industry in which Amy found herself immersed during the early years of the new millennium. Violently In Love becomes a spine-tingling piece of writing in which Studt, at the piano, allows her voice to climb to a crescendo with primal rage and with Bjork-like screams - 'it will not stop me, it will not crush me' is as mighty a motif for reborn determination as you will ever hear. Yet it is almost immediately countered with caution and gratitude - 'I came so close to the edge, I'm so glad that I'm still here'.

So are we, Amy. So are we. You may not yet be the Happiest Girl In The Universe. But hopefully, you are now well on your way.