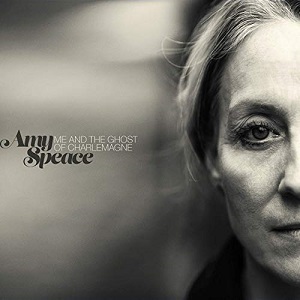 
Amy Speace, who I only recently learned is a former Shakespearean trained actress, before being discovered by Judy Collins, has finally released her long awaited new solo CD, funded through Kickstarter. Most recently we saw her in the UK as part of a critically acclaimed trio, Applewood Road.

Me and the Ghost of Charlemagne was produced by her friend and longtime musical collaborator, Neilson Hubbard, towards the end of her pregnancy with her first son, aged fifty.

The album is about dreams, reality, losing and finding things, and trying to make sense of life and the world; it is about a musician's journey and reflects her having reached a place where she is more invested in the journey than the destination. However, it could also be about the journey of any of us who have a dream. Amy herself describes the collection as "quiet and full of grace".

The eleven tracks are musically sparse, but lyrically rich, resulting in perhaps her most mature and articulate album to date, as she effortlessly blends the sounds of roots, country, pop, folk and gospel, to create something quite mesmerising.

The title track, written whilst on tour in Germany, is a stunning piano track, which on listening, appears autobiographical. The video to accompany it is absolutely beautiful; shot in the woods near her home in Hendersonville TN; a little girl representing Amy the dreamer.

Other stand out tracks include Black Abilene, the alliterative Grace of God, Standing Rock, Standing Here and the intriguingly named Ginger Ale and Lorna Doones. The CD is closed with Kindness, which seems very apt, since we certainly need more of that in our current world.

I believe this will be the album of Speace's career.

Me and the Ghost of Charlemagne