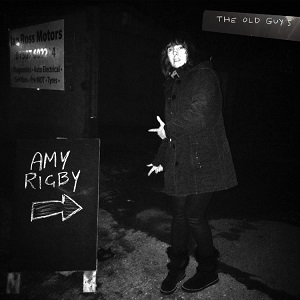 
Released Stateside in February but only now making its way to other shores, this is Rigby's first solo album in 12 years, the time between spent recording with hubbie Wreckless Eric. He's featured here playing some outstanding guitar on the album (which he also produced), but this is very much Amy's show and, soon to turn 60, she's out to show she can still rock it.

This it opens with a throbbing bassline, a striding drum beat and ringing guitars for the lyrically inspired 'From philiproth@gmail.com to rzimmerman@aol.com, an imagined an email conversation between acclaimed author Roth and Dylan in the wake of the latter winning the 2016 Nobel Prize for Literature, something the former never achieved despite being declared the greatest living American writer. Magnanimously, but with a trademark sardonic note, he says, "I'm gonna raise a glass tonight to you up there from some hotel bedspread in my underwear", the song treating the idea that, as Warhol put it, you only get so long in the spotlight. Indeed, it's a theme that, as per the title, informs many of the songs on this reflective but still fired up album.

There's times when it bristles with the spirit of classic American punk, notably so on the closing riff-pumping 'One Off', the spilling chords of 'On The Barricade' and the tumbling 'Are We Still There Yet' (a memory of the time when cars played CDs AND cassettes) , while, by contrast, 'New Sheriff', about the likes of Tony Soprano and Breaking Bad's Walter White, has an air of growly Neil Young about it, complete with feedback. Elsewhere, the narcotic 'Playing Pittsburgh', a song about her old hometown (which actually does mention Warhol), draws on druggy blues and' Back From Amarillo' could be mistaken for an Anne Murray country number, though it's unlikely she'd ever sing about having "too much shit to get through."

Of the slower numbers, the gentle sway of 'Bob' (about Dylan, natch) is caressed by warm brass, 'Slow Burner' with its hints of progressive folk does what it says and there's even a dreamy reverie track named for and an ode to Robert Altman. On the uptempo title track, where she turns an eye on her life as a musician, she sings about tipping the hat to those who paved the path before her and other young hopefuls. She learned the lessons well.