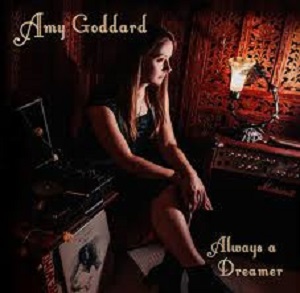 
Always A Dreamer is a very special project. In essence, a collection of covers – but one with a major edge over what that dismissive tag normally betokens. It’s an affectionate and deeply heartfelt tribute to California songwriter John Stewart (1939-2008), whose songs provided a crucial soundtrack for Amy’s formative years. Amy was exposed to Stewart’s music on car journeys by her father, Alan Whitby, an avid Stewart fan since discovering, via Radio Luxembourg in the early ’60s, The Kingston Trio (of whom Stewart was a member for six years).

OK, everyone knows Daydream Believer, and possibly Some Kind Of Love, Gold and Bringing Down The Moon (which provides Amy with her album title). But, as Amy lovingly demonstrates, Stewart’s œuvre spanning over 25 years contains many more treasures, which Amy sings beautifully and for which she makes the best possible case. Her strong evangelical zeal has led her to record this fulsome, generously-stocked 72-minute set with the help of musical friends Hannah Fisher, Brian Kutscher, Leo MacKenzie and Jon Lewis, her father (who sings lead on two songs), and privileged vocal contributions from Chuck McDermott and Kingston Trio alumni George Grove and Rick Dougherty. A new recording of Amy’s own touching tribute song closes the disc, and it proves absolutely perfect both in sentiment and idiom; it’s tellingly referential, sure, but also mirrors the key qualities Amy so clearly admires in Stewart’s own songs and shows Stewart’s pronounced influence on her own writing in the most positive way.

The disc is extremely well presented, with booklet containing full lyrics and credits. Amy had already recorded Stewart’s 2006 opus Jasmine on her Burn And Glow album, and I’m sure this won’t be the Lonesome Picker’s very last hurrah! But for now, this supremely classy set is a definitive, benchmark tribute album.