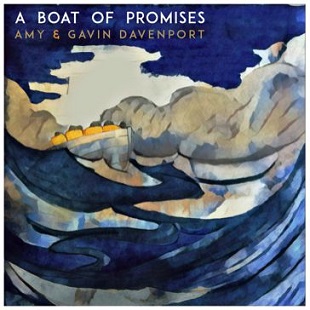 
Amy and Gavin have shared roots in their current home city of Liverpool, and both come from well-established musical families (you’ll know of Gavin’s parents Paul and Liz through a series of extremely fine CDs on their own Hallamshire Traditions label). It therefore comes as no surprise that both are strong and distinctive singers – indeed, they originally met through a shared love of singing, at a session at Cheltenham Folk Festival back in 2011. South-Yorkshire-born Gavin’s also an extremely competent exponent of the cittern and guitar, with an already exhaustive and impressive musical CV that includes Crucible, ceilidh band Hekety and a stint with The Albion Band as well as a thriving solo career. The fairly-recently-conjoined musical partnership of Amy and Gavin is finally consummated here by the release of their first joint (duo) album, on which two of Gav’s own compositions are complemented by six more recently composed items by well-respected folk songwriters and three examples of the couple’s own arrangements of traditional lyrics.

Although there’s a pronounced maritime undercurrent to much of the CD’s material (Amy’s former career was that of a professional tall-ships sailor, after all), many of the songs deal with the time-honoured folk topics, aspects of life, love and loss. Dealing with the recently penned items first, only three of them were well known to me. John Conolly’s insightful and heartfelt tale of The Widowmaker gets a superb performance from Amy here, with sympathetic cittern backing and supporting harmonies from Gavin (by coincidence, however, it follows hard on the heels of Liz Davenport’s own – for me unbeatable – a cappella rendition on Paul & Liz’s latest CD Shadows In The Mist). The “I’ll go to sea no more” refrain of Stan Rogers’ wistful lament The Jeannie C also clearly speaks very directly to Amy’s own situation with a deep personal resonance, but this time it’s Gavin taking the lead vocal, with Amy’s supportive harmonies. This particularly powerful vocal combination is very persuasive too on Keith Marsden’s masterful expanded setting of Charles Kingsley’s reflective verses When All The World Is Young.

Each of the remaining three recent songs is a disc highlight too. Nancy Kerr’s Droving Dreams (a real earworm) launches the CD in gloriously animated fashion with a salutary but also celebratory look at fleeing home in search of something better; its sweetly leaping melody line whisks the lyric along briskly into an anthemic chorus – brilliant. Anne Bonnie, written by Luke O’Hanlon and Rachel Stalker (aka The Bottletop Millionaires), commemorates the notorious female pirate of that name, and is sung to the Flying Cloud tune, whereas Archie Fisher’s The Return is virtually a première for the sequel to his fabulous Witch Of The Westmorland, specially gifted to Amy by Archie himself. Gavin’s original compositions are significant too: the CD’s title song is a thoroughly charming “accidental, improvised lullaby” that simultaneously explores the issues of forced migration and the fragility of life, while One Magpie Sits All Alone is a worthy and natural, and very traditional-sounding, addition to the existing corpus of songs concerning that bird. Best of the trad-arr songs is I’m A-Fading, which Amy sings against a hurdy gurdy drone.

In addition to Gav’s subtle and versatile musicianship, Tim Yates provides double bass on two tracks, and Tom Kitching fiddle and Jon Loomes hurdy gurdy on one track apiece. My only (minor) complaint is that considering the fine quality of their voices I’d have liked to’ve heard Amy and Gav without accompaniment sometimes. The CD is attractively digipacked, with atmospheric artwork by Amy herself. All of this adds up to a well-rounded collection of interesting songs that reveals more on each successive play.