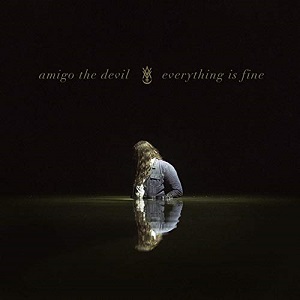 
To quote Leonard Cohen, "you want it darker?" then burrow into this debut album from Miami's Danny Kiranos, a collection of what has been termed 'murder folk' that embraces Southern gothic balladry and bluesy rock with influences that span from 16 Horsepower to Roy Orbison.

Produced by Ross Robinson, best known for his work with the likes of metal outfits Korn, Slipknot and Limp Bizkit, and with instrumentation that includes brass and strings as well as slide guitar, piano and Rage Against The Machine's Brad Wilk on drums, it opens with what must be one the titles of the year, the slow burn acoustic 'Cocaine and Abel' with its mix of self-loathing, self-determination and change as he sings "I was born impatient and I was born unkind. But I refuse to believe I have to be the same person I was born when I die."

He turns up the tempo for 'If I'm Crazy', echoes of Orbison and Chris Isaak swirling around the synth arrangement, tribal drum beat and distorted guitars as he declares, "I'm a man of my word and that word is regret." Rumbling, poundings drums continue to underpin proceedings on 'You're Perfect Too', the ominous Texicana mood enhanced by mariachi horns before the pace slows on the slow sway Cash-country twang of 'Preacher Feature', a particular highlight with its echoely-sung lyrics about faith, God, fate, and the noose.

'Hell And You' switches musical tack for a scratchy banjo-driven number that plays like a bluegrass mazurka that celebrates rotting in hell with the one you love rather than living without them. On an equally romantic note, the acoustic-sparse 'I Hope Your Husband Dies' pretty much tells you what the left it too late lyrical content concerns ("now you're with this asshole, you expect me to believe it's going to last?").

A brief spooked banjo interlude, 'Capture' serves to bridge proceedings into the vocally growled, Waitsian mazurka stomping 'Hungover In Jonestown' with its blackly humorous lines like "if romance is dead I guess I'm a necrophiliac", "this life is a joke and death is the punch line" and, given its drink-theme, the amusing wordplay of his femme fatale being "the pint of no return."

It's back to an appropriately stark acoustic sound for the bleak, end of tether, suicide-themed 'First Day Of The End Of My Life' where Van Zandt influences hover to ghostly effect. After this the rhythmically lurching 'The Liars Club' comes as welcome light relief, at least musically with its xylophone clanks and plucked strings, since the mental-breakdown infanticide-suicide lyrics are so black he doesn't even include them on the booklet.

Wilk's pounding drums and swirling synths provide an almost glam thunder to 'Everyone Gets Left Behind', collapsing into a sonic cacophony with its lyric about finding something to help us survive, knowing that sometimes you're at the back of the race not the front.

Swathed in strings, cello providing the emotional tenor, 'The Dreamer' is a deceptive love song ("I hate everything but you") that eventually reveals itself to be a murder-suicide obsession, 15-seconds of faint noise leading into the angry, nervy banjo, theramin and sonic eruptions of the unsettling 'Edmund Temper', a reference to serial killer Edmund Kemper, with its disturbing line "I got a hundred pound problem that I'm leaving on the side of the road."

After all this, it ends on a relatively upbeat note with the atmospheric, echoey slow waltz 'Stronger Than Dead' and its acknowledgement that life, with all its scars and pain, is better than the alternative, culminating in the defiant "As long as I wake up, I'm already stronger than death." If you never face the darkness, how will you ever appreciate the light.