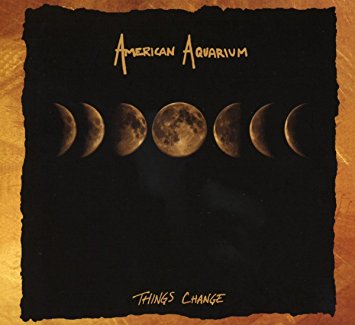 
Rising a high after seeing his debut solo album, Rockingham, reap a wave of critical acclaim, BJ Barham was thrown a curve when his band of almost ten years fell apart. However, rather than consign it to history, he set about putting together a new line up of lead guitarist Shane Booker, drummer Joey Bybee, Adam Hussey on bass and Adam Kurts handling electric guitar and pedal steel. Adding fire to the new enterprise was the shock result of the American election, something that sees the aptly titled album address both today's Trump America, but also reflect on the past and simpler times.

The album's opening track wastes no time in laying out Barham's view on the zeitgeist with 'The World Is On Fire', a slow march, keening Springsteenesque anthemic lament built on pedal steel and ringing guitars as he sings "When did the land of the free become the home of the afraid? Afraid of the world, afraid of the truth, afraid of each other." This alone more than justifies his decision to keep the band alive.

The pace picks up with the driving 'Crooked + Straight', another song that, reflecting on shifting his faith from God to an electric guitar, three chords and the truth, questions an America built on fear and hate but also about learning that you've got to take "the bruises with the breaks."

More Steve Earle bar band alt-country than Bruce, 'Tough Folks' keeps the guitars ringing out (though unfortunately the booklet reprints the previous song's lyrics) on another number spurred by the Trump victory, but as an attempt to understand why people, especially in the Southern states, voted as they did rather than condemning them for doing so as, coming from a long line of Carolina farmers he sings "Last November I saw firsthand what desperation makes good people do." The cascading chords Pettyish title track, the shortest at under three minutes, is actually about a relationship falling apart under the strain of emotional numbness rather than a comment on Trump's America, though it's certainly possible to apply the same reasoning.

Slowing it down and referencing Petty's 'I Won't Back Down', 'Running Down A Dream' and 'Learning To Fly', 'When We Were Younger Men' strikes a more personal note in its reflection on the decade the old band spent together, of the brotherhood and times shared out and, while they eventually found themselves "heading down a dead end road in a car too far gone for fixing" compounded by the sense of getting older and watching "my father's face become mine." It's a salutation to the highs and lows shared and a hope that, for all the things said "that couldn't be undone" that those with whom he shared those years can "every now and then .. can look back fondly on the days when we were younger men."

The pedal steel laced acoustic strum of 'One Day At a Time' offers another reflection on life as a touring musician, the songs about the girls, the drinks that take over your life and the way then music business tries to shape you to its own ends "and truth becomes a martyr for the sake of the song", but coming through stronger and in a better place at the end. Barham's battle with the bottle also forms the well mined country music basis for the good ole feel of 'I Gave Up Drinking (Before She Gave Up On Me)', though you might not have found the wah wah guitar on a George Jones album.

Also harking back to classic barroom alt-country filtered through a touch of 60s beat to the intro and some subsequent twanged guitar as well as featuring fiddle legend Byron Berline and backing vocals from John Moreland, the autobiographical Earle-like swagger of 'Work Conquers All' again turns an eye on finding a voice of his own, the narrator travelling across country hitting high streaks and losing them again, but never losing faith in himself, finally finding some land in Oklahoma (the song title being the state motto) on which to build a life that might not be easy but "that suits me all the same."

The penultimate track, a slow waltzing acoustic break up number, 'Shadows of You' summons the early Dylan influences with Dan Walker on accordion before it forsakes heartache to end on 'Till The Final Curtain Falls, a musically laid back upbeat country love song for Barham's wife that, sung in deeper tones, drawing on the show biz imagery evidenced in the title and with shades perhaps of Haggard and Campbell, is a pledge of eternal love and dedication to her, a closing riposte to the album title saying that some things are constant. Rather like the sheer quality of Barham's songs.