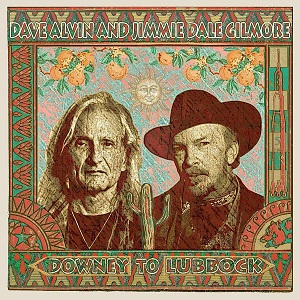 Dave Alvin & Jimmie Dale Gilmore
Album: Downey To Lubbock
Label: Yep Roc
Tracks: 12
Website: http://www.davealvin.net
.Long aware of each other and their respective high standing in the history of Americana music, Alvin and Gilmore’s paths had never crossed professionally until they came together over their mutual love of the blues, rock and roll, R&B, and folk music they’d both heard performed at LA’s Ash Grove club for a tour in 2017. That, in turns, has led to this album, the title of which refers to their respective birthplaces, their backgrounds (the Blasters and the Flatlanders) and careers obligingly detailed for the uninitiated over the course of the vocals, respectively gravelly and high and lonesome, trading six-minute track blue boogie opener.

While a rougher edge might not have gone amiss in parts, especially on emotionally defused versions of ‘Deportees’ and John Stewart’s ‘July You’re A Woman’, the album is testament to their long seasoned consummate musicianship, the choice of material mostly being covers of personal favourites and well worn classics. Alvin tips the hat to his late friend Chris Gaffney with a fine take on his divisions-themed, urban gang conflict Tex Mex number ‘The Gardens’, Van Dyke Parks on accordion, while Gilmore pays tribute to Steve Young with a waltzing warble through ‘Silverlake’.

Digging further back, they rock it up on a rousing barroom swagger through ‘Lawdy Miss Clawdy’, Brownie McGhee’s gospel stirred ‘Walk On’, and breaking out the harmonica, 20s jug band staple ‘Stealin’ Stealin’’, while taking the tempo down for traditional swamp blues ‘K.C.Moan’ and Alvin showing his guitar prowess on Lightning Hopkins’ ‘Buddy Brown’s Blues’.

Completing the covers is The Youngbloods’ 60s summer of love anthem ‘Get Together’, a sentiment that seems particularly pertinent in Trump America, the remaining number being the only original, the Alvin-penned simple acoustic ‘Billy the Kid and Geronimo’. The pair trading verses, it spins the narrative of an imagined night when the outlaw and the Indian chief met in a New Mexico barroom, the two fugitives trading their stories and reasons for their way they live.

If they decide to repeat team-up, it would be good to hear more self-penned new material rather than selections from personal and mutual jukeboxes, but as it stands this should keep fans of both more than satisfied.