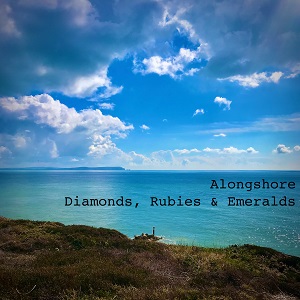 
Every now and then you get a release that drops through the letterbox and becomes a compulsion. Normally its an album that plots a very different course, one that almost shouldn't work, but despite it all, or perhaps because of it, really gets under the skin. "Diamonds, Rubies & Emeralds" is just such an album.

Alongshore is a coming together of Pendlecheek and Ledger aka Boathook Bald for an album based on tales, old and new of fisherman, smugglers and prawners. The moment you hear the plainsong opening of "For The Better Discovering And Bringing To Justice" from Pendlecheek you know that this is an album that is going to be different, almost unique.

There's a popular phrase on Bargain Hunt, about looking for something quirky, well this album would be a whole series on its own. A folk album is a history lesson, a geography lesson and a murder or two, throw in some sheep stealing, a mermaid, more than a little retribution and a prawners tendency towards exaggeration and you really do have a recipe for some serious story telling.

"Diamonds, Rubies & Emeralds" is almost two albums rolled into one, Pendlecheek plainsong ballads juxtaposed with the poems and yarns of Boathook Bald, occasionally in the same set. The town of Poole sits at the heart of the album, but references are drawn of wider local history and even to the Hull fishing fleet and Lillian Bilocca's 'Headscarf Heroes".

Fishing was and is one of the hardest professions and back in the day got mixed in with a bit of smuggling and when times were tough a bit rustling for food and this is reflected in the stories, though often the tongue is firmly embedded in the cheek.

Album's like "Diamonds, Rubies & Emeralds", don't come along that often and don't forget to read the album sleeve when listening as there is a lot of history in the songs and poems. It's an album that moves you to tears of sadness and laughter, this is an album that is so rich in narrative, one that reminds you you never quite grow out of a good story. It's hard to recommend Alongshore and "Diamonds, Rubies & Emeralds" enough. It's already been one of my album's of the week and it's destined for a lot more time on my ears yet.

For the Better Discovering and Bringing to Justice