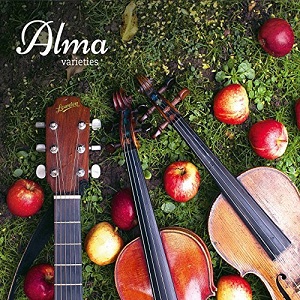 The opening track, Clark's Hornpipe is a very strong opening, with lots of drive and energy. The guitar accompaniment is kept fairly light to maintain the dance feel of the tune, dropping out to focus the ear on the carefully crafted violin harmonies before coming back in to provide a decisive ending. The clarity of the ensemble is clear in the unified musical shape and clearly defined breaks. From England, the music moves to France with two Bourrees. The change to a minor key captures the listener, as does the slightly sinister guitar and fiddle introduction. Again, the harmonies between the two fiddles are intricate and incredibly well balanced, sharing the tune between them, passing it from one player to the other and using the lower range of the fiddle to add depth to the arrangement.

Something completely different and very unique is the set of two tunes learnt from Tunisian and Iraqi Oud players. The contrast between the structure and tonality between the Western and Eastern traditions makes this track really stand out on the album. The interaction between all three instruments is really clever in the arrangement with a nice chromatic transition section featuring the interplay between one guitar and fiddle with an underlying pedal note from the second fiddle before launching into the highly syncopated Um Saed.

While much of the album is traditional material, there are a few original tunes that show another great strength in this group. The Great hall, by Emily, was written for the Elizabethan Sessions project really captures the style of the Elizabethan Galliards that inspired it. Koster and the Pink House are both tunes by Adrian. The guitar harmonics in the introduction are a lovely opening to this set, light and airy and, alongside the reverb on the violins, creates an ethereal quality that grows into something stronger and uplifting. I would say this is probably my favourite set of the album.

Overall, this is a beautiful album with some exceptional ensemble playing. Alma has a few gigs left this year, at Derby Folk Festival and the Green Note in Camden, definitely worth a trip to hear them live if you can.