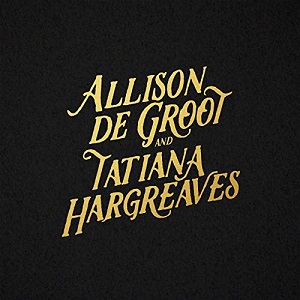 
Two names to conjure with, of the "now where have I come across these ladies before?" variety, Allison De Groot & Tatiana Hargreaves now combine their talents for a true duo release. Allison's best known for her stunning display of clawhammer banjo on the roster of Molsky's Mountain Drifters, while Tatiana's an in-demand five-string fiddler who recently contributed to Laurie Lewis' Right Hands' project The Hazel & Alice Sessions. The press release for their duo album describes Allison and Tatiana as "two artists on the leading edge of a generation of old-time players who are questioning old narratives and acknowledging the diversity that has always existed in the genre". Now where have I heard that before?… Well, in that regard, I might say that listening to the vocal tracks on Allison and Tatiana's debut album together, I'm strongly reminded of those pioneering bluegrass-oldtimers alluded to above, Hazel Dickens and Alice Gerrard, especially in terms of the kind of repertoire crossover, the tight close harmonies and the robust delivery. And hey-ho, one of the vocal tracks, Beaufort County Jail, was written by Alice Gerrard herself in the 1970s, and it's still mighty relevant today. I Don't Want To Get Married is taken from the Edna Poplin (Poplin Family) version of the traditional ditty, whereas Tatiana's solo rendition of the ballad Willie Moore was learned from the Dick Burnett recording on the Harry Smith Anthology. The disc's penultimate selection, Allison and Tatiana's delectable (and slyly "pronoun-tweaked") take on the Blue Sky Boys number Who Wouldn't be Lonely?, is another of the CD's standout tracks. But wait - that means there's only four vocal tracks out of the eleven on this album, and Allison only joins Tatiana in harmony on a couple of those: a great pity, especially as the album clocks in at barely 34 minutes (I'm sure there would've been more cuts in the can).

On to the pure instrumentals, then: Allison and Tatiana's approach is no straightahead-authentic old-timey recreation, although it has the ring of authenticity and the air of the art of living dangerously. It must be noted that, while Allison and Tatiana openly admit that they've come from outside of the cultural and geographic communities their music originated in, they're fully versed in the heritage of these communities, and are especially keen to see due credit now given to "the indigenous, Black, Queer and female musicians who weren't always visible but kept, and still keep, the music moving forward". But this proves no mere apologist stance but a genuine empathy and identification with these oft-forgotten musicians. Allison and Tatiana are invariably drawn to the same types of tunes, quirky tunes described by Tatiana as "ones that you can really get lost in, that catch your ear in a different sort of way". Thus, a hallmark of the duo's mindset and attitude is their gleeful penchant for "taking elements from the source recordings that stand out as bizarre, or perhaps even accidental, and exaggerating them". For instance, Farewell Whiskey, from the repertoire of 1930s "avant-garde" Mississippi fiddler John Hatcher features some weird sliding harmonics just about as far from old-time fiddling technique as you can get, while the Judy Hyman tune Dry thrives on its ambiguities and strange tunings and Cuckoo's Nest fairly charges ahead with the spirit of maverick fiddler Ed Haley. Perhaps the most conventionally old-time selections here are the high-octane fiddle tunes Eighth Of January and Buffalo Gals (though the latter's more usually performed as a vocal number). In contrast, there's the duo's plaintive, superbly meandersome take on Lonesome Blues and, to round off the disc, the delicious quick-lilting Green Valley Waltz, a "nice, dorky" gem from the repertoire of centenarian Arkansas fiddler and fiddle-maker Violet Hensley.

Allison and Tatiana make a powerhouse team for sure; their achievement is to infuse the often maverick spirit of their adopted musical heritage with their own comparably fiery and adventurous sensibilities and some absolutely exceptional musicianship, emerging with a contemporary aesthetic and vision that truly celebrates the music and culture of Appalachia.