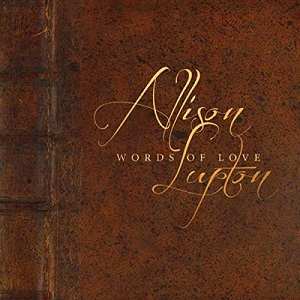 
"Words Of Love" is Canadian born Allison Lupton's fourth full length album since her debut offering in 2001. The previous one was issued in 2014 entitled "Half My Heart" which I also had the opportunity of listening to and the joy of reviewing.

Allison's brand of folk music has a distinct Celtic sound to it which, when combined with the fiddle and mandolin, both prevalent in the backing tracks, makes for an album of sheer delight. Her backing band deliver quality support to her songs and help to produce an album of folk excellence. Allison herself is a superb flautist to add to the all-round quality sound of the band.

Allison possesses a voice which is as crystal clear as mountain spring water. There is also a delightful innocence to it which when combined with her perfect diction delivers every word crisply and clearly to the listener's ear.

The title track "Words Of Love" has a country feel to and includes some brilliant fiddle playing by Shane Cook. The lyrics are based on a love letter written in 1940 and found many years later in a church. "Poverty Knock" is about the hardships of life in the North of England in the 1890's. The final track "The Grand River Waltz" is an instrumental which affords the band the opportunity to show off their skills, which I have to say are prolific.

All of the tracks on this album are an absolute delight and are all brought to life with Allison's beautiful voice. An album to savour.

What Will I Dream