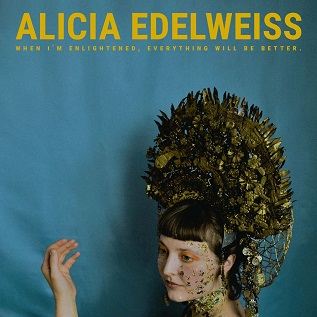 
Hailing from Vienna, Austria is quirky folk/pop/avant-garde artist Alicia Edelweiss who armed with an Accordion and a plethora of tales, dreams and sagas, invites us to ''When I'm Enlightened, Everything Will Be Better.

To call this a folk album is perhaps quite a stretch but leans more to anti-folk and more obscure sub-genres. One of the early stand-out tracks is 'The Cockroaches and Me' where Edelweiss' wordplay leaves the listener in amusement, wonder and perhaps even an element of curiosity.

The album is layered with violins and other orchestral instruments giving the album a very typical 'Viennese' vibe as well as theatrical style singing and style of performance as shown in 'Fare Thee Well'.

As aforementioned, this isn't anywhere near a 'typical' folk album, rather an artistic creation which bends and contorts between avant-garde pop, orchestral pieces and anti-folk. It's an album which has its intense and heavy moments which isn't something to listen to in the background. You have to dedicate yourself and immerse yourself in the album and perhaps you might feel enlightened yourself...