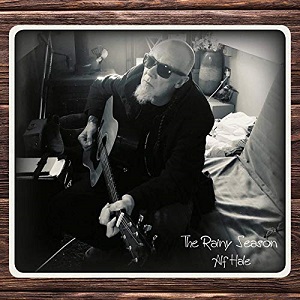 
Unlike many of my peers I never really got The Doors, but there can be no denying the quality of Jim Morrison's voice. With Alf Hale's "The Rainy Season" you are in a for a vocal treat that reprises a Morrison or Scott Walker (RIP) sound. I could not help feeling throughout that this could have been the direction Morrison's music would have taken had he not become one of the "27 club", taken from us far too early. It is a cracking album of three and four minute songs.

This is Hale's reminder to the world that the music styles from the '60s and '70s very much have a place in this world of downloads and streaming. "The Rainy Season" is a rock album although the opening few bars of "My Lover's Arms" lull the listener into expecting something jazzier. Sure, there are undercurrents of jazz but this album floats between blues and rock. "Misanthrope" could have been written for the aforementioned Scott Walker. Yes, his voice is that good.

The title track justifies its billing: an acoustic ballad that reminds me of a little of Show Of Hands, with a beautifully crafted chorus, which if Hale was a stadium rocker would surely have the whole audience singing along. It's one of those songs that has the right amount of space between choruses, creating anticipation. I know I will regularly be singing along to this one in the car! "Sacred" raises the pace a little, beginning with the immortal line "When did I become a freak?" but this is also a rattling good song, lyrically and musically.

"Naïve" has a Beach Boy style beginning that then goes on to fill the background of the song, which chugs along at a comfortable pace, introducing some great guitar riffs along the way. Piano based songs are frequently used to provide a slower interlude, and "the Loneliness of Being with Someone" does just that. This is a carefully constructed, lyrically bleak ballad with beautiful guitar breaks that enhance the emotion of the song.

"Sexy in the Town" continues the slower pace, with rim shots that would not be out of place in one of Graham Parker's slower songs. There's a real quality about this album that has the listener drawing all kinds of comparisons but this has the feel of a mature piece of work from an established songwriter, which somewhat belies the fact that this is only Hale's second recorded album. "Only Humans Cry" has the feel of a single, with bright acoustic rhythm and backing vocals, then it's back to ballad territory for "Only Love", a theme that carries into "We'll Be Wed".

From the first bars of the final track "Witness Protection" it feels that that the album is going to finish on a high, and it doesn't disappoint. I can see this album accompanying me n many a road trip.