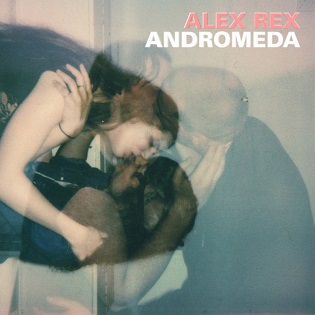 
Andromeda is the third in the series of solo albums released under the name of Alex Rex by Alex Neilson (drummer and songwriter who formerly fronted the mighty Trembling Bells). It's quite different from its predecessors, and at the same time logical in its emotional progression - this being entirely consistent with an artist who's on a constant personal voyage of self-discovery and revealing more of himself with each subsequent release. In the case of Alex's previous albums Vermilion and Otterburn, although each represented a complete statement of vision in itself it was not always obvious where it was heading or where it might next lead. Andromeda is the most complex statement yet, "a game of emotional snakes-and-ladders, the product of two years spent in therapy, the gym and on Tinder".

So it's a vertiginous roller-coaster ride of often epic proportions whose linguistic expression is extraordinarily rich and all-consuming. On first hearing, the musical settings may either overwhelm or perplex, indeed possibly both, and this provides a challenge of a different order from that posed by the hopeful assimilation of Alex's amazingly vivid lyrics; and this juxtaposition in turn creates a sense of unease or disquiet in the listener that never quite goes away.

The album's very title is an indication of the vast galaxy of experience covered by its songs - in all senses, from the mass of musical universes to the emotional spirals one might say. The sound-world is similarly wide-screen, and its vast, often sprawling nature is conjured by the liberal use of a large cast of musical collaborators including Alex's core band consisting of Rory Haye, Audrey Bizouerne and Georgia Seddon, with key contributions from erstwhile Trembling Bells members Lavinia Blackwell and Steve Jackson, Tim Davidson, Paddy Doyle, Chris Geddes, and at least half-a-dozen more including vocalists Debbie Armour and Amanda Nixic - and, on the album's distinctly strange opening track, there's the unmistakable voice of Shirley Collins intoning the Song Of Self Doubt to a backdrop of eerie chiming and birdsong.

The angst-filled soulful gospel feel of Handful Of Hair comes next, with a mournful lilt that curiously recalls Leonard Cohen, and this state of desperate self-pitying meditation continues on into the panoramic slow-drag irony-fuelled tirade of I Am Happy, which is replete with further punning referentials that prove deadly serious. After a climax of repeated descending scales, the final couplet dissolves into Funeral Music For Alex Rex, a defiant (maybe even theatrically Hammill-esque) declaration set against a questioning singalong chorus; the fulsome, opaque texturing then finds room for a scathing guitar solo before a swift brassy coda.

Then, as of from the confines of the coffin, comes the claustrophobic reflection Oblivion. Twang and pedal steel solos take the bridge into Coward's Song, in which Alex audibly struggles to come to terms with the death of his brother in a singularly plaintive, lilting musical setting. The harder musical edge of Rottweilers and Alibi Blues is cathartic in expressing and informing the writer's desperation, which reaches a natural apogee on the scattergun reflections and refractions of I'm Not Hurting No More which are declaimed to a grinding, churning, discordant cacophony that sounds like "all my songs are talking to each other". In the midst of this all, The Uses Of Trauma are cautiously dissected, as Alex wanders through the Haunted House with an honest yet pained delivery that tellingly mixes anguish and anger with an unbearable sadness. And so finally it's time to Pass The Mask…

Notwithstanding the sometimes grandiose lavishness (and perhaps even marginal overload) of the musical arrangements, the immense lyrical interest of Alex's songs is never subsumed, and close scrutiny of the texts (helpfully provided in the enclosed booklet) is essential in my opinion. Turns of phrase that might otherwise be familiar are twisted purposefully. The inevitability of "always the plague ship, never the bride" becomes the paradox of "nothing can heal or destroy you better than time". Which, of course, we know only too well.

For Andromeda is a profoundly compelling and disturbing experience, not for the faint-hearted - yet it is one which needs to be taken through, for the good of the soul.