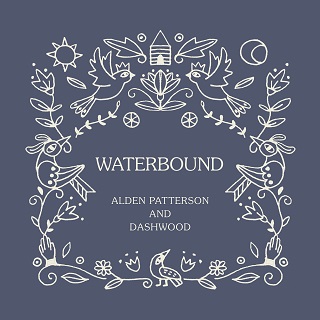 
When is a live album not a live album? Well, in the case of this Norwich-based trio's third full-length release, 'Waterbound', the answer is not that simple. It contains eight previously unreleased tracks, plus a slightly extended version of 'The Old Priory', an instrumental track that also appeared on 2016's debut, 'Call Me Home'. With the entire album being recorded in just ten hours at Owen Turner's Sick Room Studios on a wintry day last December, each number was played live and, in all but one track, the first of just two takes made it to the finished pressing. There were no overdubs, and no editing. I guess that is as close to a 'live' recording as you are going to get without a stage and an audience.

And it is that faithful capture of their 'live' sound that makes 'Waterbound' such an exhilarating listen, almost as much a delight as the beautifully balanced track listing. Christina Alden (guitar), Alex Patterson (violin, mandolin) and Noel Dashwood (dobro) came together in 2015 via Norwich's vibrant folk and Americana scene. Alden had featured in a female folk duo called The Woodland Creatures, Patterson played with a Lowestoft five-piece folk-rock outfit called Murphy's Lore, and Dashwood had a lively 'sunshine and love' band called Dumbfoundus, that delighted audiences with a hugely entertaining mix of original songs and covers. He later joined Norwich based country/folk/bluegrass outfit Feral Mouth as dobro player, and has also accompanied award-winning singer-songwriter Lisa Redford in live shows and on studio recordings. Together, Alden, Patterson and Dashwood's intricately blended vocals, exquisite playing, and captivating songs have made them firm festival favourites. Last year they were asked to perform as UK tour support to Show of Hands, and have played their own shows throughout Europe.

'Waterbound' is a musical confluence of traditional and original material, with each member of the trio contributing to the songwriting process, as well as to the arrangements. It opens with 'Seven Years', inspired by the old English folk song, 'The Rambling Sailor'. Alden's 'Winter Came' was inspired by the sight of three trapped House Buntings attempting to fly away on their annual migration. Its metaphor for free movement, and parallels drawn with human migration, are gentle, but nonetheless powerful.

Patterson's instrumentals are both inspired by his Suffolk homeland, with 'The Dyeing Room' referencing his mother's traditional textile workshop. In each, the instruments interweave, combining in a rich, almost telepathic, fabric of sound.

Dashwood's 'The Broads in December' is a beautiful ode to a beautiful part of the world, capturing the very essence of the Norfolk Broads in winter, a time when the holidaymakers have mostly gone, and nature briefly reclaims the marshes and waterways as its own.

For a stunning demonstration of the trio's tight harmonies, and how their voices blend seamlessly together, the title track Waterbound is delivered 'a capella'. Learnt from a Californian country and bluegrass band, Good 'Ol Persons, 'Waterbound' encapsulates the varying inspirations and influences that have filtered and percolated throughout the development of Alden, Patterson and Dashwood's sound.

This is, without doubt, the studio album that perfectly distils the essence of one of the country's finest upcoming folk trios. Live.

The Broads In December