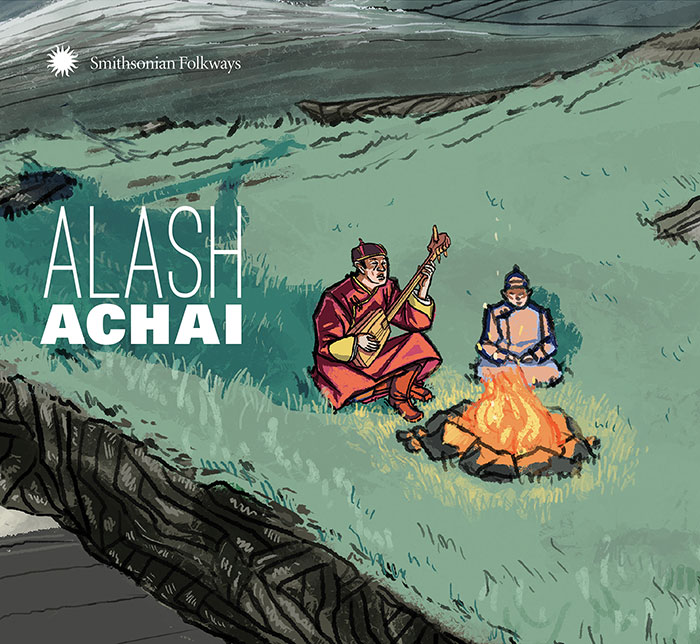 
Alash is a trio of musicians from Tuva, a remote area of Siberia bordering Mongolia and Kazakhstan which boasts its own independent culture. The traditional music of Tuva is unlike any other ethnic music, and pretty much unmistakable, once heard never forgotten. Although instruments are used – the bowed igil, plucked doshpuluur, blown shoor and murgu flutes, demir-xomus (a kind of jaw harp) and kengirge (large drum, often with kit accoutrements) – the principal focus of Tuvan music is throat-singing. But even that term is a kind of umbrella for five different vocal “styles”, although as many as two or three of these can be combined in performance; the most immediately identifiable of these are xöömei (deeply resonant, low-register) and sygyt (overtone-drone, higher-register). It’s just possible that some readers will have some experience of a modern-day incarnation of Tuvan music through post-punk rock bands Yat-kha or Huun Huur Tu or through solo artists Radik Tülüsh or Albert Kuvezin, while a select few other musicians (e.g. David Moss of Lightgarden) have mastered the technique of overtone singing and incorporated it into their music. But by and large, Tuvan music is unexplored territory for the majority of listeners. Which is why I’m emphasising here that while it’s unusual, and can sometimes sound positively unearthly, it’s not anywhere near as inaccessible or impenetrable as it might sound. And the exceptional presentation of this Alash disc – with brilliant detailed sound and a 24-page booklet providing copious fascinating information – should enable much wider appreciation.

The clue to the rationale for this CD (Alash’s third release) lies in its title; Achai takes its name from the Tuvan word for father (more precisely, its affectionate form of dad), and can be seen as a direct tribute to a latter-day father of Tuvan music, Kongar-ool Ondar, a tireless promoter of Tuvan music both at home and abroad who founded and led the Center for Traditional Tuvan Culture & Crafts in the Tuvan capital city of Kyzyl; tragically, he died in 2013; the members of Alash had all been under Kongar-ool Ondar’s tutelage. This CD deliberately comes full circle from a song where a father addresses his son (Oglimga) to one where the son addresses his father (Achai), Between those points, we encounter songs that reflect the nomadic nature of the Tuvan people and the harsh lives they lead, the feudal class system, and the geography of their native region (here treated anthropomorphically in a song concerning two rivers). There’s also an example of the Tuvan brand of “country music”, Kara Kush, which deals with the concerns and cares of everyday human life – and horses – and a competition song (My Throat, The Cuckoo) that compares the singer’s voice to the sounds of morning birds.

Alash also take Tuvan music forward, in one sense (on Let’s Relax) creating “a sonic landscape that grows, changes and evolves over the course of the piece”, while on two shorter pieces developing their own vision of the evolving tradition by adventurously incorporating a beatboxer alongside the murgu or the bayan (accordion). But it’s still the wonderful throat singing that provides the core signature on the disc’s 13 tracks – that sharply precise, deep-throat guttural (a bit like a more deliberately focused Tom Waits sound is the closest, but in the end probably inadequate, description). It doesn’t matter that you won’t understand the words being sung, for as a matter of interest there are at least two tracks which could otherwise almost have come from a blues or roots album by an American artist – opener Oglumga, written by legendary Tuvan musician Alexander Sarzhat-ool, and the above-mentioned Kara Kush (a setting of a poem by Sayan Mongush) creatively blend old and new sounds (and even contain hints of Malian guitar playing in their accompaniment). But the most concentrated demonstration of the different styles of throat singing comes on Ayan-ool Sam’s outstanding solo performance of the traditional piece plainly and somewhat misleadingly titled Igil/Xöömei.

This is a really stimulating musical experience – sure, not for the faint-hearted perhaps, but one I find tremendously addictive. Open-eared readers will, I’m sure, not regret making its acquaintance – so be brave, give it a try.

My Throat, the Cuckoo