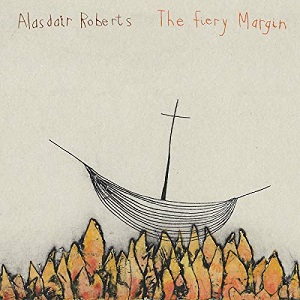 
Alasdair's one of the most prolific contributors to the alt-folk scene, with an (already) extensive back-catalogue. His bewilderingly diverse and wide-ranging discography to date ranges from significant and well-appointed reinterpretations of traditional songs and ballads through to seriously pertinent, if sometimes idiosyncratic, personal commentaries on contemporary affairs. Much of his career has been spent in fruitful and eclectic collaboration with musicians from the worlds of experimental, roots and avant-folk, while even his solo records have invariably embraced contributions from other like-minded musicians.

The Fiery Margin, the latest of Alasdair's releases to fall into the "ostensibly solo" bracket, observes the latter feature in that Alasdair's accompanied by his empathic and increasingly-established rhythm section comprising Stevie Jones (double bass, piano) and Alex Neilson (drums). Their extraordinarily supportive musicianship is at once (literally) uplifting and deeply underplanted, forming its own commentary on Alasdair's nimbly eccentric, often quirky lyrics, and creative to the extent that each song also inhabits its own customised milieu. Also appearing on this latest set is Dublin viola player Ailbhe nic Oireachtaigh, who's well versed in improvisatory and early musics. On a few tracks there's also some occasional unearthly backing vocals of ISB-like strangeness, which may well be down to Mary Hampton who also appears in the ancillary credits for the album.

The Fiery Margin also follows an established Alasdair Roberts pattern in that musically it has a strong feel of tradition; this in itself is a reflection of Alasdair's long-established preoccupation with history, not only in its broadest and most universal sense (the shifting sands of an eternally uncertain future) but also in its concern with its more arcane minutiae. For example, on the rather unpromisingly titled Europe, an examination of the contemporary state, we learn almost incidentally of the life of holocaust survivor Freddie Knoller, and on False Flesh the jaunty-hoppity old-time tune Turkey In the Straw provides an unexpected backdrop for the tale of early-15th-century mystic Margery Kempe. Another staple Appalachian tune, Give The Fiddler A Dram, furnishes the foundation for The Evernew Tongue, an ancient Irish text on the mysteries of creation and apocalypse, which also manages to incorporate a blazing prog-style electric guitar solo from Jer Reid.

The folkloric bent of The Stranger With The Scythe receives a decidedly bizarre, indeed almost flippant setting that melds barbershop, pedal-steel country waltz and even lounge, with a thoroughly manic saxophone coda (courtesy of Raymond McDonald) casually tossed in for good measure. The circus-waltzery all-the-world's-a-stage philosophy of Actors swaggers along to the chummy accordion of guest Neil Sutcliffe. Alex's bouncingly inventive drumming is a special feature of several tracks, notably the slightly irreverent Common Clay, where a stone gargoyle voices his opinion on the world's eternal roundabout and the sacred-and-profane dichotomy of the creative process itself. Although a certain wry humour is rarely far away from Alasdair's observations, there's room for sanguine traditional-style beauty too, as on the brooding, reflective Learning Is Eternal and on album closer the Untrue Womb which focuses on another of Alasdair's regular preoccupations, the impact of the old upon the new, in a chilling sonic exploration of the internal effect of this curse expressed in strikingly visceral imagery. One of the album's central tracks, A Keen, is an attempt to explore an "almost unimaginably painful" form of the emotion of grief at the loss of a loved one - that of a parent upon the early death of a child. (And yet to my mind the album version of this song is eclipsed in poignant intensity by a recent YouTube video which features Alasdair performing the song solo, at the piano.)

The Fiery Margin marks another stage in Alasdair's brilliantly adventurous exposition of metaphysical and historical explorations, couched in music of deceptively subtle power.