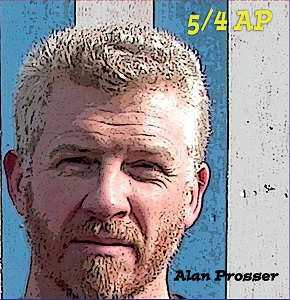 
It is easy to underestimate the contribution founder-member Alan Prosser has made to the Oysterband over the years. Easily overshadowed by the charisma of John Jones, the fiddle pyrotechnics of Ian Telfer, or the drive of the rhythm section, he has nevertheless provided the melodic core that holds the band together. This has been particularly evident when the stripped-back line-up - the Oysters Three - perform their largely acoustic sets. So it is particularly pleasing to greet a new solo album by Alan.

5/4 AP is a truly solo album - Alan plays all the guitars, fiddle and guitar synth himself. It is also possibly a unique album: all ten tracks are written in 5 time, as opposed to 3/4 or 4/4. Citing the influence of Pentangle ("Take Three Girls") and Dave Brubeck ("Take 5"), this reflects his comfort at playing in this more relaxed timing. It also makes more than a passing nod to his early influences, especially Davey Graham - check out the track "Five for You" for echoes of "Anji".

The guitar playing throughout is, as you would expect, exceptional. There is a surety and lightness of touch on the acoustic numbers, and a restrained power on the electric numbers. There are no wasted notes; every note is chosen to enhance the melody, the mood or the lyrics. There is no flash and no fill.

Which brings us to the content, and the conundrum which Alan poses in his choice of music and sequencing. There are ten tracks: six mainly acoustic instrumental tunes and four songs, which adopt a (subtle) use of electric instrumentation - all tunes are self-penned. The tracks alternate instrumental and vocal tracks, which tends to reduce the coherence of the music. An alternative may have been to separate the tunes from the songs, as though they formed two sides of a vinyl release. Luckily, you can always use for cd/digital programming to create your own running order.

The tunes are exquisite, and deftly played, with a folk/medieval style strongly reminiscent of Davey Graham, but also of early Bert Jansch and, especially, John Renbourn. Opening rack "Ridingate" is a good example of the Renbourn style, while "Out of Kent" and the aforementioned "Five for you" have the jazzier feel of Graham or Jansch. The tunes have a gentle, often pastoral feel, as the titles, such as "Stour Water" suggest. "Tommy Atkins' March (5/2)"* started as a song, but Alan has ditched the lyrics, to create a beautiful dance tune. As an acoustic set, the six tunes are delightful compositions and are peerlessly played.

The four songs on the CD present greater problems for the reviewer. They tend to have a more rock feel than the instrumentals, with greater use of overdubbing, and electric instruments on the solos. The lyrics certainly display Alan's strengths as a story-teller. "Simple is never easy" in my view has a late sixties/early 70's feel, reminiscent of Stackridge, John Martyn or Magna Carta. "Suicide Bomber" - the title is self-explanatory - is typical of Alan's strengths as a teller of stories. It has a narrative flow which pulls you into the meaning of the words; the bomber is "a heartbeat away from Paradise". However, the chirpy, vaguely North African tune is rather at odds with the topic. "Mickey's song" has that medieval tone, and could be a Jethro Tull/Martin Barre song. This is the rather tedious story of a former Oysterband sound engineer's love life; the tone throughout is rather flat, as is some of the singing. My personal favourite of the songs is "Amy isn't waiting". This poignant story of a man who leaves his train on a whim, to search for a long-lost love, is thoroughly engaging. On this song, Alan manages to sing better within the limitations of his voice, which is limited in range and tends to be flat of pitch. His voice throughout the CD is pleasant but not strong, and represents the weakest element of an album which is otherwise rich in both lyrics and musicianship.

A must for Oysterband fans, and strongly recommended to anyone who likes melodic, lyrically interesting, primarily acoustic music.