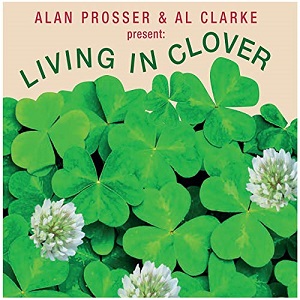 
When I first played this album it felt like just like two mates doing what they do and really enjoying the process. From the off! The album has a true freedom about it.

The opening song "Dream On" feels like a journey back to the mid-70s, with its guitar and harmonica drive, 'echoes of 10CC' chorus, and a 'fade to end' that would grace a Joe Walsh solo song. It's about finding a better place to live, a better way to live, and brought back my own memories of trying to find a suitable place to live and trying to re-establish my life in Bristol back in the day.

It should not of course be too much of a surprise that an album created by these too itinerant musicians should be of such quality. For the uninitiated Alan Prosser, on a sabbatical from the Oysterband, plays bass, drums, fiddle and produces the album. Alan Clarke, who has worked with members of both Caravan and Soft Machine, takes the vocals and delivers that wonderful harmonica sound.

The beginning of "Hold Back Time / Time Machine" has a Jethro Tull air about it, and is one of those songs that seems to be a statement of all this duo's past influences, with other inclusions possibly being Cat Stevens, The Kinks, The Beatles, and The Strawbs. It's poppy, it's folky, it's bluesy, it's proggy and carries a distinctly upbeat atmosphere for lyrics that in contrast feel quite sad.

"See You In The Morning" again carries an air of Cat Stevens with added harmonic but that's where the comparison ends. The optimistic lyrics feel like a kind of reassurance to a child, and that harmonica. Wow! And the mood it creates carries on into "High Rise / Living In Clover". I have a confession. I'm not the harmonica's greatest fan because too many musicians have used it as just a thing to blow through! However, Al Clarke's delivers like Paul Jones and really makes it sing, especially in backing to the spoken word section where an elderly resident extols the virtues of her life and living in a Battersea flat. Imaginative, evocative, and sensitively done.

"Jack's Tune" is a short jazz-blues ditty that makes you want to sing along. Maybe the idea here is for people like me to generate their own lyrics! This is a well-placed instrumental break that leaves the listener with a little more time to process to Battersea story, and creates one of the album's 'moments'. "King O' The Casbah" begins with a recording of a walk through one, and for me provides the best song of the album, with its reggae rhythm and Middle Eastern / North African influences fusing together beautifully with…yes, you guessed it…some absolutely wonderful harmonica breaks.

The pace slows with the gently delivered "Lazy Boy" and its delicate acoustic guitar backdrop. We all feel like Lazy boy from time to time. The world is increasingly frantic and there's nothing wrong with tasking yourself out of the fray from time to time. By the way, I think Al Clarke has made a convert of me. The harmonica on this song is gorgeous, and so too is the overall production.

"Save Me" returns to that '70s feel again, in its music and its theme. I think anyone who has lived into their sixties like me probably has had feelings of not quite belonging from time to time in their lives. It can happen socially or at work, or it can be much more embedded and long term than that. "I am a fugitive with no place to hide" has real resonance. This fine album then concludes with "Living In Clover (Reprise)" where the elderly Battersea resident reminds us that appreciating what you have should be a mantra of life.

So, not at all bad for two mates enjoying themselves! There's a confidence in this album that comes from many years' experience of playing and producing.