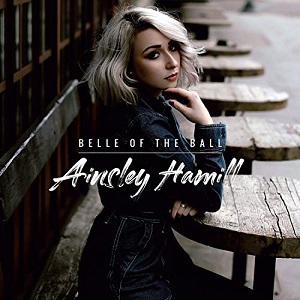 
Ainsley Hammill, Scottish singer songwriter, member of groups, Forth Moon and Barluath, doesn't put a foot wrong on BELLE OF THE BALL, her debut solo release. She powers dexterously through the Gaelic "Latha Dhomh's mi buain a' Choirce" with strident accompaniment. Ainsley also shows herself to be a powerful vocalist on the more jazzy title track, her deep vibrato soaring over the tight rhythm and Toby Shaer's guitar. Gentler still is the escapist love song "Runaways". There is space between the guitar notes and the Bass and drums and a sense of real power in Ainsley's bluesy vocal.

"Ailein Duinn" is a slow burn Gaelic song with a superb vocal from Hammill, nuanced and passionate. "The Green Woods Back Home" is a rousing closer that you can imagine is a crowd pleaser. Ainsley's vocal is powerful and passionate with the band flying around her carried by Graham Coe's Bluegrass Cello, Shaer's fiddle and Evan Carson's percussion.

This is a well rehearsed and tight band that muscles through the last number. A powerful set of performances from a singer and band equally at home on fast, slow and spirited material. Great sense of class and possibility comes out through this set.

Belle Of The Ball