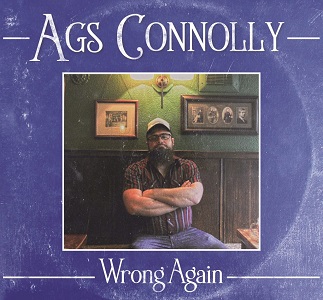 
With the release of his third album, the warbling Oxfordshire singer-songwriter effortlessly confirms that he's among the elite of this country's purveyors of traditional country music. Self-produced this time around with accordionist Michael Guerra from The Mavericks and fiddle player Eamon McLoughlin again contributing to the sound, his personal honky tonk has tears and beers ballads and break-up waltzes on tap with their familiar Tex-Mex tastes as well as now stocking a guest brew of western swing.

Veined with themes of the lonely life of the road and lost love, it opens down on the border riding the same range as Freddy Fender and Marty Robbins with Guerra's squeezebox colouring 'I'll Say When', a song about returning after a break-up bender but still needing a few for the road to recovery.

Then it's into Buck Owens and George Jones territory for McLoughlin's fiddle and Joe Harvey-Whyte's pedal steel stained 'The Meaning Of The Word', another honky tonk tale of unfaithfulness and learning the hard way, before slowing the pace down for the aching memories of the simply strummed 'Lonely Nights In Austin' and love left behind as he sings how "when you meet someone special, the feeling never goes away, it just retreats into the corner of your heart more everyday".

Next up is the title track, 'Wrong Again (You Lose A Life)', briskly waltzing across the old school barroom in the arms of the ghosts of lovers who've heard the lines and lies before hoping that this time the deck may be stacked in your favour. From here, the strummed upbeat 'Say It Out Loud' climbs back into the Texicali saddle for a song drawing on his own experiences sharing shows with the unnamed troubadour of the lyrics at a time when both of them had lost both the compass and the map, the chorus about facing up to what's gone wrong and "seeking refuge in crowd" apparently a virtual direct quote.

Which I guess leads logically to 'What Were You Going To Do About It', about staring into the mirror and not recognising the person staring back and wondering whether you can bring about a change or just spend your life "living like a ghost" and let the years slide by while, another waltzer back through time, memories and regrets, 'Indian Sign' speaks of finding success as a musician but being cursed to lose in love every time.

On his previous album he included a Loudon Wainwright III cover, this time round it's Gordon Lightfoot with a fine version of 'Early Morning Rain' that digs into the song's emotional ache to be back home, the album wrapping up with the simple picked Willie Nelson shaded bruised heart balladry of 'Then and Now' and, finally, kicking up the sawdust on the barroom floor for that western swing moment of the sprightly 'Sad Songs Forever' featuring bassist Anna Robinson on harmonies and some nifty picking that just goes to show how lonely can still show you a good time and make you feel alive.

He's been likened to original heroes like Willie and George as well as country traditionalist standard bearers such as Dale Watson and Tyler Childers, and if that gets him attention then that's fine, but, like fellow Brits My Darling Clementine, he doesn't need to stand on anyone's shoulders, he's already a country giant.

Wrong Again (You Lose A Life)