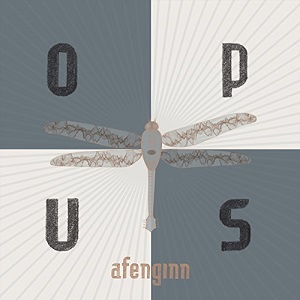 
Did you ever consider that you might be missing out on a classical, folk, jazz, North African crossover double album, with lyrics in an invented language based on Latin? Me neither. But I was. I have to admit that I took a while to stick this one in the CD player – things to do, Dylan's new triple album to “admire” - and when I did, I really didn't expect to like it. But what a treat!

Pounding drumming gives way to classical strings. A cittern is strummed. The vocals are eerily familiar but at the same time alien. Eastern European folk dance is invoked, we're in the middle ages, we're in Prague, we're in trouble. There is found percussion worthy of a more folksie Einstürzende Neubaten. It's a hoot! More than that, it's terrific!

Afenginn are from Denmark, and this is their sixth album. Leading light Kim Rafael Nyberg explains that the genesis of the album was during a long lay-up due to a ruptured plantaris tendon sustained in Australia. I'm not sure whether Opus is markedly different from their previous work. I'm not sure whether his evidently painful incident has any real relevance. What I do know is that this 84 minute symphonic work is audacious in scope, impressive in effect, and triumphant in realisation.

The discs have been put together with serious intent and in a spirit of serious musical exploration, but you also get the impression that Nyberg and his cohort have had enormous fun doing what they have done. In this they have to be both congratulated and envied.

Try and track this down – you wouldn't want to miss out, would you?