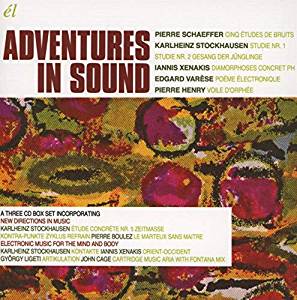 
From the label that brought us the recent comprehensive anthology of the works of composer Edgard Varèse, here’s another exciting three-disc box, one of an equally esoteric nature but – albeit with more in the way of listener persistence required – potentially every bit as rewarding.

Its central thesis is to present New Directions In Music, as in the genuinely pioneering sounds being created by “serious” composers in Europe and America alongside, but way outwith, the radar of, the “classical” mainstream – or even its most extreme, ascetic offshoots. Predominantly, but not exclusively, the realm of early electronic music – which to the layman probably means really obscure and pre-BBC Radiophonic Workshop – and music built from abstract sound rather than derived from “conventional” orchestral sources. Post-war cultural reorientation was inspiring composers to seeking out new ways of organising sound outside of what they regarded as “passé” musical traditions.

To many listeners, even hardened music fans (of whatever persuasion), the term “electronic music” might (depending on one’s age of course) conjure up a cheesy “Bleep & Booster” sci-fi soundtrack, or an equally cheesy moog-plays-Bach, or else a cold, sterile, robotic 80s industrial synthscape. But of course there have been plenty of startlingly innovative uses of electronics throughout the history of pop, rock and folk musics, from Pink Floyd, Grateful Dead, Frank Zappa, The United States Of America and White Noise through to Portishead, Lisa Knapp and Stick In The Wheel. The listener of perennially enquiring mind will find this set’s exploration of the origins of electronic music experimentation fascinating and revealing, dating as the recordings do from the days when electronic music was viewed as a true new dimension in sound creativity and yes, the way forward. It really did feel like a new era was dawning, and anything might have been possible sonically – there were no barriers. While at the same time, paradoxically, the strictures of twelve-tone music were leading to inexorable austerity in classical composition which at first seemed entirely at odds with the aleatoric ideas of the experimenters. The contradictions of the era are well explored in the 24-page booklet essay that accompanies this three-disc box-set, as are the myriad of onward influences, inspirations and cross-fertilisations that worked both ways from those electronic music adventures. And indeed in the more overtly chamber-music-like sounds presented on the set’s second disc.

I admit, it can be difficult to listen to some of the electronic compositions here and appreciate them as music per se (or at any rate what would conventionally be regarded as musical invention). You simply have to adjust your ears somehow and take on a different mindset. And the level and nature of what one would term musical creativity is altogether more evident – and persuasive – on pieces like Iannis Xenakis’ Orient-Occident and, best of all, John Cage’s prescient Fontana Mix (which combined treated natural sounds with a soprano voice from whose singing occasional words could be distinguished) than on the groundbreaking – if tentative – “noises-off” ambience of Pierre Schaeffer’s turntable-driven “musique concrète” suite Cinq Études De Bruits (1948), which among other things incorporated train sounds, and Cage’s rasping, deliberately abrasive Cartridge Music (1960), which even more doggedly followed the dictum that “all sounds, even those ordinarily thought to be undesirable, are accepted in this music”) – one especially grinding section of this piece might even be mistaken for part of the famous distorted Jimi Hendrix Star Spangled Banner improvisation. (D’you remember cartridges?… but can they ever have been used more innovatively than in this truly amazing 20-minute piece.) But there are also the issues of “musique-concrète manufactured or treated sounds versus electronic music generated from scratch” which complicate study of the contexts in which these musics were created…

This magnificent set is sub-divided into three basic categories: Adventures In Sound (Disc 1) presents examples of the earliest, pioneering instances of electronic composition, from Schaeffer, Stockhausen, Xenakis, Varèse and Pierre Henry (the latter was to work with rock band Spooky Tooth on their Ceremony LP, some 15 years later than his Voile D’Orphée included here, whereas 1957’s Poème Électronique was Varèse’s only full-blown foray into the genre, although he was to combine electronic tape with orchestral forces on Déserts). The most enterprising item on Disc 1 is undoubtedly Stockhausen’s Gesang Der Jünglinge, which incorporates the actual sound of syllables sung by young boys’ voices into an electronic melée. The booklet points out that on discovering Stockhausen’s music, in particular this piece, in 1967, Paul McCartney was inspired to take the acceptable frontiers of the Beatles’ own experimentation even further out, leading to the unutterably weird and disjointed Revolution 9 (on The White Album).

Disc 2 is subtitled New Directions In Music, and is basically a reissue of a landmark disc coordinated by Robert Craft in 1957/8 topped up with a handful of other innovative pieces by Stockhausen. After the disc’s initial item (Stockhausen’s archetypal Étude Concrète, its only electronic piece), the late-50s music of Stockhausen and Pierre Boulez presents the men as “architects” of the personalisation of new music. This involved the deeper, intensified, if rarefied, pieces written for small instrumental ensemble, often examining the effect of chance and random action on the part of the performers. Zeitmasse, scored for five woodwind players, explores the interaction of different time-measures and playing techniques, whereas Zyklus involves a virtuoso percussionist in the juxtaposition of a random and closed playing cycle and Refrain embodies a more reposeful gamelan trance state. Kontra-punkte, however, is the disc’s thorniest proposition, and even today its musical argument feels obscure and impenetrable, whether or not one views it in terms of tonal relationships. The central work on this disc is Boulez’s 1955 masterwork Le Marteau Sans Maître, which features an alto (contralto) voice singing three texts by surrealist poet René Char against a restless, clattery, jittery and clangorous six-piece ensemble. (It’s presented in its revised, complete version.) Unfortunately, the importance of this seminal work is nowhere explained in the notes, and no detailed reference to it appears in the otherwise well-appointed booklet. A missed opportunity, sadly.

Disc 3 is subtitled Electronic Music For The Mind And Body, and certainly can be heard to contain some of the most visceral musical creations in the whole field of electronic music. Reverting to the layman’s perspective I guess, and perhaps the most obviously “space-age”-sounding of the electronic music compositions presented here is Artikulation, written by György Ligeti in 1958 and created in the West German radio studio in Cologne. Yes, that’s the same composer who not many years later would write the fantastic, expansive Lux Aeterna and Atmosphères scores which were to be used on the soundtrack to Kubrick’s stellar movie 2001, but you wouldn’t believe it listening to this more literally futuristic four-minute piece, which is at times almost comic in its blurping bleeping scattergun sound-gestures. (You might discern its fallout in the Zappa tracks Nasal Retentive Calliope Music and The Chrome Plated Megaphone Of Destiny, both on the Mothers’ We’re Only In It For The Money LP, or even the cheeky Roger Waters solo indulgence Several Species Of Small Furry Animals… from Umma-gumma.) But then in total contrast we find the sprawling panorama potential of electronica that’s evidenced par excellence on the more expanded sound-landscape of Karlheinz Stockhausen’s Kontakte (which at 35 minutes is by some measure the most extended item on this set), the performance of which involves four loudspeakers and tape.

The set makes a brave attempt to prove its central rationale, of presenting Stockhausen as the catalyst and central figure in post-war sonic adventurousness, through radical and revolutionary new techniques, both in electronic and “real instrument” music. It also makes a good case for his influence. In that it makes available under one roof a host of rare recordings on its three well-stocked discs, and in terms of its generally illuminating booklet presentation, this is a stimulating release, which on close examination and with parallel reading of the aforementioned booklet, is sure to open up vital avenues of further investigation and exploration for the adventurous and enquiring listener.