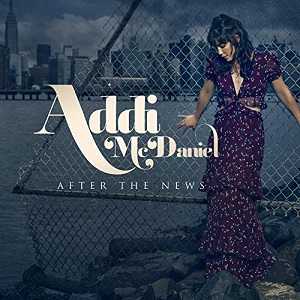 
Based in Brooklyn, McDaniel has a smoky, breathy voice that seems to have lived the experiences of several lifetimes, but this is, in fact, her debut solo album (she's also half of a duo with harpist Jacqueline Kerrod), a cocktail of blues, soul, jazz and folk that recalls such classic female artists of the late 60s/early 70s as Laura Nyro, Bonnie Koloc, Phoebe Snow and Karla Bonoff as well as more contemporary names like Norah Jones.

The songs mostly written by Tom Sierling, Kylie Harris and producer/drummer Marco Giovino, adopting characters to suit the narratives, , she embraces themes of regret, forgiveness, grief, pain, acceptance and transcendence opening with 'I Would Have Written Less', a sultry, bluesy number that tells of career's rise and fall, and regrets about the relationship cost along the way. The same sweltering vibe sweats its way through 'Gave Up Giving Up', although here the lyrics are more about the sacrifices made to try and keep things together as she sings "I gave up giving up booze for you" and how it still all fell apart ("I'm tired of being just a muse for you") as the narrator returns to "living on Mars."

'Are You Serious' is the first of the album's two covers, this by Andrew Bird, a soulful reading as, featuring some hot guitar work, it explores the insufficiency of language to convey the depth of what we feel, although the fade feels rather abrupt. The other, and one of the standout cuts, is Bruce Cockburn's 'Pacing The Cage', a gentle acoustic take with Sonny Barrato on accordion.

The most striking number in terms of emotional heft has to be 'Forgiving You, a slow-paved, slow burn ballad in which the character hears, presumably from the woman he left her for, of a former lover's premature passing, any recriminations falling way in grief as she sings "I didn't think I would be forgiving you, but I never thought I'd be outliving you."

The theme of mortality continues with the near six-minute 'After The News' ("he began to put his affairs in order, so dispassionately it was a wonder"), strings and bass clarinet intensifying the claustrophobic mood evoked by the ticking percussion.

Uplift comes with the suitably Latin and trombone coloured 'Havana', basically a celebration of discovering the Cuban capital and the people's love for life where "despite their woes they dance in the street." Joy is short lived, however, with the slow swaying The Lacuna returning to things falling apart and how "life by consensus is doomed to fail", although the mood is more of quiet acceptance of wanting different things and drifting apart, referencing the 1957 Western 3.10 To Yuma as she sings of how his angry words fall into the void.

Again dreamily arranged for strings and clarinet, with a melancholic melody to complement the subject matter, the wistfully sung 'Sorry' is another reflection on a relationship aftermath, the things that shouldn't have been said or done and how her lover voted with his feet.

The first of the last two originals, the self-examining, away from the noise 'Cloud' has a definite New York Tenderberry feel while the album ends with the sparse but gradually welling 'No One Gets Over Anything', the only track on which she shares a writing credit, the lyric about seeing a past lover on the street with their new partner and the wounds it reopens harking back to 'Forgiving You'.

In many ways this is an album out of time, but perhaps that's just another way of saying it's also timeless, though next time it would be interesting to hear her own voice as a writer rather than as an interpreter.