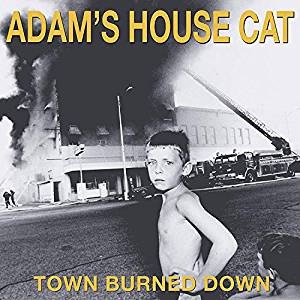 
Back in 1985, in the Muscles Shoals area of Alabama, the then teenage Mike Cooley and Patterson Hood, joined by drummer Chuck Tremblay, got together to form a band named after the Southern expression "I wouldn't know him from Adam's house cat." Despite having a song featured on a compilation album and three years of gigging, no deal was forthcoming and, in 1990, the band eventually decided to go it alone and record an album. However, they broke up before it was ever released and the tapes were presumed lost after the Muscles Shoals Sound studios where it was recorded was liquidated. Six years later, the two friends would form Drive-By Truckers.

In 2015, the unmixed tapes, along with an EP's worth of other recordings, were rediscovered and, spurred by Tremblay's near-fatal heart attack last year, Hood resolved to record new vocals and finally complete the album.

Seeing light of day for the first time, while firmly steeped in the country-flavoured southern rock of its time and without the politics of subsequent work, it's an early indication of the musical path the pair would eventually hew to such huge success.

It opens with the decidedly rocking Neil Young-styled 'Lookout Mountain', swiftly followed by the title track's driving ode to getting the hell out of a dead end life, but it's the third track, 'Runaway Train', fuelled by Hood's parents' divorce, that is the album's most immediate, a guitar chiming country swagger steeped in Tom Pettyisms.

Petty can also be heard on 'Long Time Ago', Springsteen rides the '6 O'Clock Train' while the Young influence, especially in Cooley's vocals, resurfaces on the likes of 'Down On Me' and the chugging 'Shot Rang Out' . Elsewhere, the southern swagger of Skynyrd can be traced on 'Buttholeville', another song that, like 'Lookout Mountain', remains a DBT staple, teenage angst-ridden 'Child Abuse' is pure Bo Diddley riffery. Closing with the mandolin-accompanied REM echoes of 'Cemeteries', it may be almost thirty years old, but if you didn't know the background or those involved, you'd likely be hailing this as a powerful debut auguring a trajectory to stardom. You'd not be wrong.