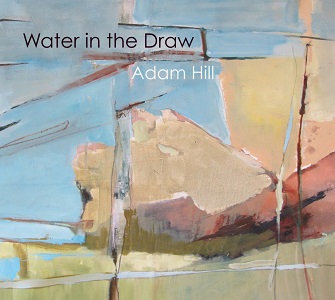 
For his last album, 2015's Old Paint, the British Columbia based singer took an assortment of traditional folk songs and represented them with new chords and lyrics. This time round, however, only three are traditional numbers, the remained all being self-penned. It all came together during a month long stint in a log cabin in southeastern Wyoming where, armed with just guitar, upright bass and an in situ grand piano, coupled with assorted field recordings such as a boulder plumbing to a creek serving as percussion he assembled this intriguing and at times off the wall collection.

It opens with the western saloon styled plinketty piano trills of the bouncingly upbeat 'Echo Chamber' as he sings about feeling good about feeling good and playfully echoes the title line within the song itself before it ends in a kind of piano freak out. The lonesome wail of a coyote introduces the slower lurch of 'Magnetic North' on which the piano plays like some silent movie accompaniment, the song at times evoking early Billy Joel, again rounding off with a kind of sonic cacophony and the return of the coyote.

A celebratory reel originating from North Carolina, the instrumental 'Dance All Night' (With A Bottle In my Hand) is the first of three re-imagined traditional tracks, double bass serving as a fiddle and a sampled crackle and cackle of a late night bonfire appearing mid-way before winding down on piano notes.

The wind whistling through the cabin door adds colour to 'Ghost', a simply strummed, piano accompanied old time mid tempo thigh slap folksy number with a jaunty chorus about how "it's so far to Carolina".

Returning to traditional pastures, for 'Liberty' he uses a ring modulator to transform the piano into sounding like a set of bells, the old time instrumental serving a backdrop for a spoken passage about human nature and the concept of personal liberty in the contemporary world on which, quoting Rousseau, the unnamed narrator observes how we are born free but everywhere in chains and that "it's up to you to break those chains wherever you find them."

Things get bluesy for the chain gang gospel rhythm 'Oh Me Oh My', heavy use of effects and pounding piano conjuring a swirling soundscape of delirium before a spoken sample and the sounds of winding up a musical box introduces the final trad number, 'Sally Ann Johnson', another reel, this time from West Virginia, the bass again being played like a fiddle.

The album ends in an old Western musical landscape with the waltztime 'Airplane Man', essentially a song about paternal family heritage and how "so many men I've known have headed home". At just over half an hour, it's a touch on the short side, but there's enough within to keep you absorbed for far longer.