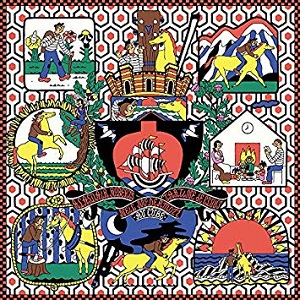 
This lavishly-produced artefact is released (on both vinyl and CD) by the Belgium-based independent label Okraina, which specialises in unusual cross-cultural collaborations – hence the lengthy time-lag in my finally getting this music to review. But it’s been well worth it, I assure you.

It’s always something of a full-time job keeping track of Alasdair Roberts’ activities, of course – he’s constantly darting about between solo ventures and esoteric collaborations. This is a live recording (made – with the exception of just one track – at the Cube Microplex arts venue in Bristol in December 2017) of one of the latest of these, a magical conjoining with Scottish fiddler and Furrow Collective member Neil McDermott and the French three-piece harmony group Tartine de Clous (Geoffroy Dudoult, Thomas Georget and Guillaume Maupin). Although Alasdair had first spoken of his admiration for the French trio’s first album in a fRoots article in January 2016, the five musicians did not get to meet until January 2017, but they subsequently reunited for a small number of live performances in which they explored a common set of songs comprising French and Scottish traditional songs and a handful of Roberts originals of traditional inspiration. The unique atmosphere of this intimate collaboration is tangible – we feel we are present at an almost alchemical forging-together of potentially disparate musical (and cultural) elements, one which results in something greater than the sum of its parts.

Alasdair’s special, intense way with the traditional material is justly renowned, as are his unmistakable singing voice and individual guitar style. The three Roberts compositions on this disc, all fairly early works, exemplify the more eerie aspect of traditional inspiration; two of them come from his 2001 release under the name of Appendix Out, The Night Is Advancing: the incantatory, almost primal Year Waxing, Year Waning recalls the ISB, while the distinctly wyrder Cyclone’s Vernal Retreat is beset with alien-sounding scratchings and strange mouth-percussion noises. Alasdair’s third song here, I Fell In Love (which originally appeared on his 2003 CD Farewell Sorrow) probably feels closer lyric-wise to the trad-influenced aura of Crazy Man Michael, but the accompanying vocal ululations and meandering fiddle lines are pure ISB. This track brings arguably the most rounded and fruitful collaborative achievement of the project. However, the purely a cappella La Mère Cruelle (a revisit of the Cruel Mother ballad Alasdair first essayed on his 2005 album No Earthly Man) forms a spine-tingling standout to the set, with its memorable, and somewhat adventurous, combination of verses sung in English with refrain sung in French. Genius that!…

Of the remaining tracks, four are songs sung in French, showcasing the joyous power of the Tartine de Clous trio. There’s the spirited a cappella Je Vous Ai Menti Souvent and the spicily accompanied traditional Les Aiguillettes, which contrast with the more reflective Tout En Me Promenant (featuring some nimble electric guitar from Alasdair) and the more familiar traditional folksong Brave Marin. An interesting choice is a cover of Anne Briggs’ parting song Go Your Way, this time sung not by Alasdair, while the set also contains an instrumental item, a delicate account of an air by Shetland’s Tom Anderson. The odd-track-out, recorded at East London venue The Old Dentist, is a gently harmonised and softly-accompanied account of the ballad Rosie Anderson, the source for which is credited to a Dave Burland recording.

What a wonderful collaboration – and how fortunate we are to have this live set enshrined on record for posterity.