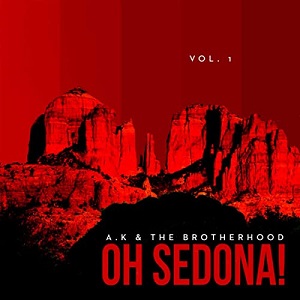 
A.K. being Alo Karlsson and The Brotherhood his fellow Swedes, this their second album after various line-up changes, but. Named for the Arizona desert town, again parlaying a Scandinavian brand of Americana. 'California Free Bird' gets things in flight in classic alt-country style with A.K.'s dust-grained vocals couched with widescreen guitars and drums, moving to vintage Eagles-style piano ballad the relationship-themed 'For The Long Run' before they get country funky with '(Livin' On) Tupelo Time' which I guess sounds exactly how you might imagine from the title.

If jugbands came from New Orleans, they'd probably make music like 'Sweet Miranda' with its goodtime carnival march oomph and saloon piano, sax and trumpet flourishes, but then the mood pulls into a bar for the broken-hearted with the slow sway, noodling piano and brushed snares of 'Big City Sidewalks', a duet with Sofia Loell.

It's back to uptempo, twangy guitar chugging Americana rock on 'Where All The Dreams Go', that upbeat rootsy musical drive and swagger also to be found on 'Miles and Memories', the hooks-laden 'Halfway To Anywhere' and, one of the stand out lyrics, the stabbing barroom piano backdrop of 'Like The Devil Reads The Bible', even when the sentiments may be more downcast.

Of the remaining cuts, 'Man Up' is a loping wolfman blues, but otherwise it's ballad territory with the waltzing Willie Nelson late night vibe of 'Guiding Light' and, in a similar mood, the equally excellent near six-minute world weary resignation album closer 'Broken Rainbows'. If you didn't know the background, you'd not for a moment think this wasn't some seasoned, star turn born and bred in either Nashville or Austin. Although there's been consistently strong output from the likes of solo artists such as Benjamin Ffolke Thomas and Christian Kjellvander and, of course First Aid Kit, it's been a while since Sweden produced a band that could take on native Americana on an equal footing. These boys most certainly can.

For The Long Run