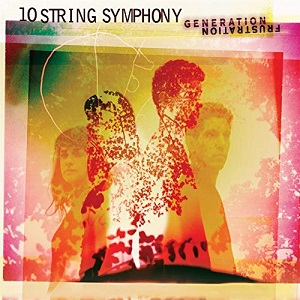 
This relatively new folk-bluegrass-Americana duo (comprising fiddle players Rachel Baiman and Christian Sedelmyer) rather intrigued me just over three years ago with their debut album Weight Of The World, which never quite made it to the review table but alerted me to the emergence of a quite unique dynamic in the sub-genre, which then received many well-deserved plaudits in the music press. Having lived with that album for a while now, I was keen to investigate its followup when it appeared - and yet, although it was released last summer, subsequent distribution problems ensued, as a result of which a copy didn't finally arrive on my doormat until very recently. Naturally, I'd say that the delay generated much frustration (ha!)…

But hell, it was worth the wait, and with any luck it won't be too late for you to catch hold of a copy now. It's one of those records where a direct, full-on rock'n'roll attitude and madly aware songwriting come together and are applied to a musically adventurous and creatively arranged soundscape which in this case is built exclusively around luxuriant yet clear-sighted string textures conjured from and built around 5- and 4-string fiddles and occasional banjo. Hard to describe or give a handle to really, and therein lies much of 10 String Symphony's appeal.

The album's been produced by Kris Drever, whose own improvisational and experimental flair with his band Lau has clearly informed Rachel and Christian's playing. Their forthright singing and intensely individual arrangements ensure a powerful and rewarding experience for the listener, and the duo's lyrics engage by exploring themes such as the angers and anxieties often felt by the marginalised during troubled times. In doing so they address concerns common to us all regarding politics, racism, poverty, privilege and the global climate crisis, but not in a manner of preaching. The continuing tussle between traditional and contemporary in their music is a potent reflection of the emotional and political turmoil of the lyrics; perhaps the most impact is felt in the album's closing stages, with the clamorous Ballad Of Bruno and the tensely strung ballad-anthem Throw Away The Moon vying for highlight status. By direct contrast, final track The Tidy Bug (an instrumental penned by George Jackson) plays the album out in jaunty syncopated fashion, and features Kris guesting on guitar; I can see why it's there, but maybe it doesn't quite fit or follow.

But in summary, you need to hear 10 String Symphony, for the genuinely boundary-pushing sound of this duo has a strikingly distinctive signature, one that's not at all easily forgotten even after other discs have replaced it on the player. Onwards and upwards then.