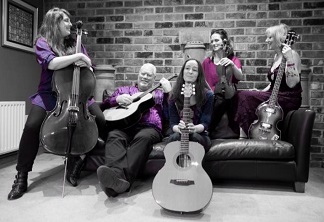 Listen Up - WolfNote
A look at some of the emerging artists of the acoustic roots & folk circuit, this month we focus on Berkshire based Folk/ Roots group WolfNote who released their debut album Herding Cats last year.

How would you describe your music ?
Well, that's a tricky one for us. We have had a lot of difficulty trying to slot ourselves into a genre because that's not something we ever really thought to do. Of course, other people need to know what our sound is so they can work out whether ours might be the kind of music they like. Someone once described us as a "little orchestra!"
Our songs are very personal. We draw extensively on our individual experiences of, and in, the world, and our feelings about those experiences. That all sounds terribly serious, but it's really just what seems to come out of us! We do try to keep the music quite light, and have a bit of humour about the lyrics, even if we are writing about potentially challenging topics, and we really don't take ourselves very seriously at all!
We have very eclectic taste in music as a band and try hard to keep things as varied and interesting as we can, by changing up lead vocals, harmonies, writers and styles all the time. No one person really occupies a central role in WolfNote, and we have a very democratic creative process. People just bring stuff to the table, whether it's lyrics or a tune or whatever, and then we just "throw it to the wolves!" We just say to each other - do what you want on this. If it's your song, you might say that you hear something in a particular way or, because we play quite a few instruments between us, on a particular instrument, but otherwise pretty much anything goes. It's not unusual for our songs to go through a few incarnations before we find something that we feel really resonates for us.

What has been your highlight so far?
We were very privileged to be awarded Best Showcase Artist of the Year in 2016 at the GSMC Music Awards, and our debut album Herding Cats has been nominated this year for GSMC Album of the Year. It is really very gratifying and exciting to have people listening to our music and voting for us in these awards. Making the album was a highlight in itself. It was great fun and very chilled out.
We also played the BBC Introducing stage at Henley Festival in 2017 where we supported the English National Opera. We arrived while ENO were rehearsing, which was quite unnerving, but once we were up there we really enjoyed ourselves. It was incredibly exciting to play a stage and festival of that size, and the sound engineers did a fantastic job with all our various instruments and vocals.

What plans regarding recordings, video, tours etc do you have for the future?
Well, the grand plan is a little tent or stage at Glastonbury if we can get there! We would very much like to be able to do some more festivals, and we have a lot more songs in the pipeline. We are hoping to get a few of our live performances on video to make our music more accessible, and there have also been murmurs of a Christmas themed album, so watch this space!

Is there anything else you would like to say or any message to our readers ?
We would really like to thank all those that take the trouble to come and see us play, and support us by buying our music. We feel very lucky to be able to put our songs out into the world and for them to be so positively received.