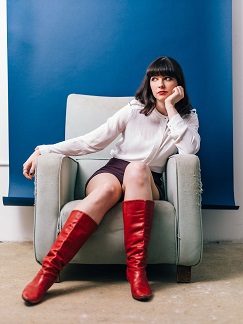 Singer/songwriter Roxanne de Bastion is set to release her cover of The National’s I Should Live In Salt on Friday. She talked to Fatea writer Nic Rigby about her new single, working with guitar legend Bernard Butler and multi-talented folk musician Ben Walker and winning a place at a secret gig by Sir Paul McCartney at the Abbey Road Studios.
The last time I interviewed Roxanne she was on a high from a long list of high profile gigs which included winning over the crowds at Cambridge Folk Festival.
But with live gigs cancelled due to lockdown, Roxanne has been playing online gigs and started a Patreon page.

“I feel heartbroken about not playing shows. It’s such a huge part of who I am, it really has been disorienting not knowing when we’ll be able to get back to that without worry,” she says.
“It’s been a challenging time for most and it’s definitely a time to be grateful for what we have, whether that’s a safe space to live, staying well, having someone to talk to or having technology that allow us to keep in touch with people.
“Musically, it’s been exciting despite not being able to play live. I decided to put out my new single Erase and go on a virtual UK tour to support the release.
“It’s not the same as touring, but it felt really good to be able to bring people some distraction and some fun with my music, while also helping out some of my independent venues and promoters.”

This Friday her cover of The National’s I Should Live In Salt, produced by Ben Walker, is released.

“I was late to the party, but The National have become one of my favourite bands. I love songs where the lyrics read like quirky poetry (I think the line that originally drew me in and made me fall in love with them was ‘serve me the sky with a big slice of lemon’).
“I was actually also supposed to see them play in June - as that show couldn’t happen, this is my little tribute.”

The song is a powerful, emotional song about estrangement.

“It’s easy to feel alone and estranged sometimes, even around those we love the most and feel closest to. Nothing worthwhile is easy all the time,” she says.

Roxanne, who worked with Ben before on her Seeing You EP in 2015, says he is “brilliant and super easy to work with - above anything, he’s just a really great guitar player”.
In May she released her single Erase produced by ex-Suede guitarist Bernard Butler which has won plaudits across radio and newspapers.

“The song is very much about the re-writing of history, be that on an interpersonal or political level. It’s just about being really unimpressed with ineptitude and inaction. Unfortunately that is becoming more and more relevant on a political level,” she says.
“I was definitely angry at the time and wanted to express that - an emotion I hardly ever let out in my songwriting.”

I asked her about how she first started working with such an in-demand producer – who has worked with Manic Street Preachers, the Libertines, Texas, Paloma Faith and many others.

“It was just one of those magic things. I cold-emailed him, explaining what I wanted to achieve and why I wanted to work with him. He replied, asking me to send him demos, ‘the rougher the better’,” she says.
“Luckily, he seemed to really like what he heard and after a coffee meeting at Bar Italia, we started working together.”

Roxanne adds that the song Erase “is one of the tracks where he added the most. My demo was quite different, not the song structure, but I originally had this Joy-Division-y pulsating guitar underlying the whole thing”
She continues: “He convinced me to scrap that and replace it with those reverb-y chords.

“It’s a lot more atmospheric and lets the song breath more. It was usually a pretty even mix of our ideas, but on this occasion, he’d demoed that entire bombastic string section and I was just blown away.
“I absolutely love it and I don’t think I’ve ever said that with such vehemence about a recording of mine ever.”

Finally I wanted to ask Roxanne, who is a huge Beatles fan, about the secret gig at Abbey Road, which was reviewed in The Sunday Times where Roxanne was referred to when the writer says: “Live, he (Sir Paul) feeds off the crowd, such as the young woman in a glittery dress pogoing to A Hard Day's.”

Roxanne says: “That happened in the summer of 2018… I still can’t believe it actually happened… I am not one for competitions and have never won anything in my life, but I decided to answer a tweet one day that called on fans to make a short video explaining why they should get an invite to an ‘exclusive event in London with Sir Paul McCartney’.
“I had no idea what I was letting myself in for, but it turned out to be an invite to the filming of his show for Spotify at Abbey Road’s Studio 2. There were only 15 winners and I was one of them.
“The rest of the audience (about 100 people) were friends and fans of Sir Paul. It was an amazing show and a magical day - I cannot believe I got the opportunity to hear those songs performed in that hallowed space (and in such a SMALL room.)
“I was right at the front and just had the best time, doing what you do at gigs (singing, jumping about, crying!). I was super emotional and must have left an impression as he went on to reference me in his interview about the show. I really hope he was amused or that it was endearing. I still worry that he must have thought I was mad, but I suppose he’s seen it all.
“All of us competition winners are still in touch - it’s the loveliest, geekiest thing ever.”

(Nic Rigby is part of the band Nic Norton and the County Band. See nicnortonmusic.com)

I Should Live In Salt