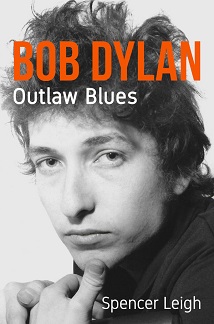 The timing of the publication is particularly apposite as it coincides neatly with the release of Dylan's new album "Rough And Rowdy Ways" , his first collection of new , self-written songs since his 2012 album "Tempest".

You may ask yourself "Does the world need another biography of Bob Dylan ? Hasn't Dylan been the subject of countless books , including those by such eminent writers as Anthony Scaduto, Robert Shelton, Howard Sounes, Richard Williams , Paul Williams, Michael Gray, Clinton Heylin, Greil Marcus and many more ? What more can be added to the already voluminous Dylan bibliography?"

Well, my response to those questions is that , yes, we do need a new biography of Bob Dylan as long as it is written by Spencer Leigh.

Spencer has written over 3 dozen books and is a leading expert on The Beatles and Merseybeat. In the past 5 years alone he has penned definitive biographies of Frank Sinatra, Simon and Garfunkel , Elvis Presley and Buddy Holly. Phew!

Now he has turned his attention to another icon of modern music, the inimitable Bob Dylan.

Spencer's books are renowned for their meticulous research and attention to accuracy and none more so than this comprehensive look at the legend that is Bob Dylan.

In preparing for this book Spencer personally interviewed over 300 musicians, friends and acquaintances of Dylan and the list of those interviewees reads like a Who's Who of popular music.

Over the course of 451 pages [ not including the 60 pages of comprehensive appendices] Spencer takes us on a fascinating, fact-filled journey through Dylan's life , from his childhood in Hibbing , Minnesota right up to the present day , with Dylan now in his 80th year.

Barely a page goes by without some nugget coming to light. In order to test this , I opened the book at a random page and discovered that ,for example, the young Tom Waits pasted the words of "Desolation Row" on his wall and has acknowledged that this "got him started". Fascinating.

I have read many books about Dylan but this one is among the very best. It is both scholarly and highly entertaining , which is rare for music biographies , which are usually one or the other.

Spencer Leigh has written a masterful biography which will certainly delight all those who have an interest in Dylan and his music . Read the book and listen to "Rough And Rowdy Ways" to get the full Bob Dylan Experience !

We are luck enough to have a copy of "Bob Dylan - Outlaw Blues", signed by the author Spencer Leigh, to give away to a luck winner who will have their name drawn at random on August 15th 2020
Simply mail us the correct answer to the following question and be the lucky name drawn out of the metaphorical hat.

What age did Dylan turn this year ?

Send your answer here and we'll be in touch with the lucky winner.

Bob Dylan : Outlaw Blues is published by McNidder And Grace