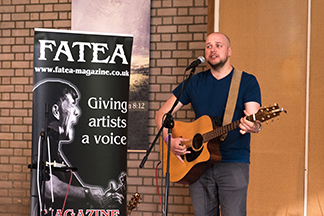 One of the questions I get asked most at the seminars is why an artist does or doesn't get selected for something, almost never am I asked why someone got something, I guess a lot of that comes from the perspective of the view, something good happens, well that's either well deserved from one angle or down to luck, being owed a favour, nepotism etc from another angle.

In a completely open field and all things being equal there will still need to be a differentiator, from a Fatea point of view if I only have three slots to award on a stage I only have three slots, I can't suddenly magic another six simply because I've had nine fantastic artists apply for them. I can't bend the rules of time and squeeze three hours of songs into a one hour show.

As you may be aware, Fatea, recently put on a stage at wimborne minster folk festival and we had three acts play it, why did we choose those three? Well due to size of stage, change over restrictions, budget etc I had to rule out groups above three, no fault of their own, no better or worse than the acts that got selected and that left me with more acts than I could use so it was finding the right ones to fit the bill.

Let me use an instrument analogy here, guitars and guitar products. There are absolutely shedloads of different guitar brands out there many with more than one model, but as a guitarist, you are looking to get the one that gives you the right sound, the one that complements song and voice, from your perspective and that won't always be the best guitar, by brand and price, but the one that best does the job, I'll concede that price might be a factor if you think the best guitar for the job is a Martin guitar d-28 authentic 1937, but you can see where I'm going.

So once again, all things being equal (and they rarely are) and you're lining up to audition and the other three axe players have got the same axe as you, then you are down to how you play the damned thing and what sets you apart from the rest and that's down to your talent and the way you set it up.

There's only so much you can do on instrument, tuning, strings, you can buy boutique effects pedals, capos etc and hope to bring them together that gives you the sound that really makes you stand out from the rest, sets you a part and gives you a unique sells pitch (USP).

Ultimately you have to have something that sets you apart from the crowd and that doesn't mean you have to be the best, you just have to stand out for the right reason. I don't do that many interviews in Fatea any more, mainly for time reasons, but when I do an interview, personally, I'm already sold on the idea/concept because it's taking me into a new space, we've covered folk operas and folk choirs and been mightily impressed, check out our reviews, but a folk ballet now that's worth an interview.

You don't see Fatea covering a lot of crowd funding projects, if we did, it would be all that we do, but you know that if we have featured a crowd funding article, you can be sure it's something special and almost certainly something for the music community rather than an individual or band.

Ultimately you need something that makes you own it, think why did they, not why didn't I. What is there I can do that makes me stand out. Whilst it still might not be enough, ultimately as with my live sessions, there may be other criteria that needs to be met, but you're at least giving yourself a fighting chance. Oh and you don't have to be way out there, just out there enough.