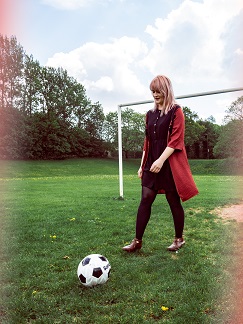 Fatea is proud to be the launch site for the video of Minnie Birch's new video for her latest single "God's Footballer", her rewrite of the Billy Bragg song and featuring the memories of fans from around the country. We are also proud to make it our featured video.

It features renowned folk artist Lukas Drinkwater on Double Bass and the song is interspersed with memories from John Reed, Robert Rhead and Aly Bart who all share what football means to them and talk about experiences on the terraces.

This first single is a taster of what people can expect of Minnie's new record, "You're Not Singing Anymore", which sees her mix her passion for folk music with football. Minnie asks the questions "where else do people all sing on mass together? Other than at worship or a folk club? ...The football ground that is where.

Minnie's new record is both a folk record and a look at what it means to be a football supporter and the social movement, history and politics behind the songs they sing on the terraces. With the full blown album due to arrive in the spring.

2020 is going to be a busy year for Minnie Birch, if you can't wait for "You're Not Singing Anymore", then she's out on a double header tour with Robert Lane during the first quarter.