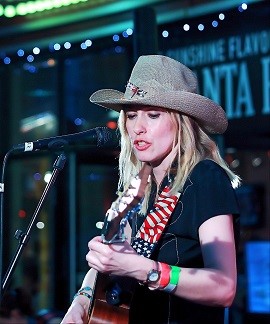 Acclaimed country singer songwriter Lisa Redford may have her roots in Norfolk but has a sound that has won plaudits throughout the world including BBC Radio 2 presenter Bob Harris, Squeeze’s Glenn Tilbrook and The New York Times. With a new EP out she spoke to Fatea writer Nic Rigby.

Lisa Redford is excited about her new EP Edge of Love which was produced by Jose McGill, from award-winning Americana band The Vagaband.

“I wanted to get something new out there. The songs seemed to really flow well together thematically and lyric wise,” she says.

“You know they're kind of all based around a sort of similar theme of not just love, but kind of letting go, not just in a romantic sense.”

The title track, she says, was about “wanting to fall, like just letting yourself go even if the consequences might not work out. So basically, it's quite heartfelt, not like most of my songs”.

“I've had the five songs and it just really felt nice that they worked well together and I did them all acoustic and I've started to perform one or two of them live.”

She says it was “terrific” working with Jose McGill and recording the tracks at The Crunch recording studios in Norwich.

“Jose would just come up immediately with some really good ideas, like sort of little riffs, just motifs. He plays bass and percussion, and piano.

“And what happened was that the work just kind of really developed organically.”

She believes the country music scene is “vibrant” at present.

“I think things often regrow, you know, and come back to a whole new audience. It's quite exciting. It's overwhelming a bit because when I was first playing there was a few pubs and clubs, but now there are many more venues,” she says.

She’s prioritising the EP before thinking of a new album.

“I'm so excited about the EP I want to try and get that to as many people to hear it, but I'm always being creative and I’ve had a great response so far,” she says.