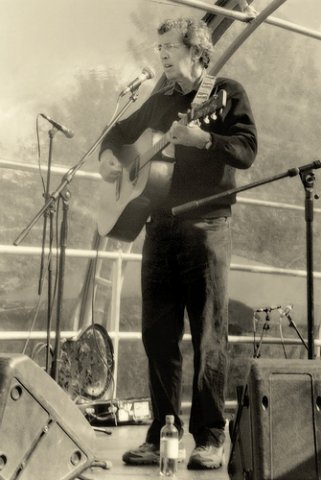 Coming up to his 85th birthday this year, the singer songwriter Leon Rosselson could be seen as the elder statesman of political songwriting in the UK.
He's inspired everyone from Billy Bragg, Dick Gaughan, Robb Johnson, Grace Petrie and Lady Maisery.
His song World Turned Upside Down, about the Diggers movement during the English Civil War has been widely covered, most notably on one of Bragg's first albums.
While his song Palaces of Gold, inspired by the Aberfan disaster, became relevant again and was widely shared on the internet after the Grenfell Tower Fire.
Rosselson grew up during the war.

"We listened to the radio a lot. I would've heard folk music at the time which would be blues, Bing Crosby, Vera Lynn, and some stuff like that," he told me.
"Also my father used to sing a lot. He was trained as an opera singer, but actually he was a musician who played the violin professionally.
"He had fine tenor voice, so he was always singing. He would sing Yiddish songs, other people would sometimes come round and sing songs, Yiddish songs, being a Jewish family, because that was his first language. He also loved opera.
"There was a lot of music in the house. Oh yeah, a lot of music in the house. I started learning piano. I was playing classical stuff, and I can remember the US singer Paul Robeson and Josh White.

Rosselson got involved in the folk music scene while studying at Cambridge University.

"There was a folk club called the St Lawrence Society as you probably know that. And I did join them. I actually booked Margaret Barry. She was a wild Irish street singer, and she used to sing in pubs in Camden town.
"Her calling card was She Moved Through the Fayre. I remember booking her for the university folk club which is a bit of a risk because she's ... some clash of cultures I suppose - Cambridge university and a street singer from Ireland. But it went off fine! She drank a lot of Guinness.
"I used to sing traditional songs at that time, talking about 53 to 56 but it really wasn't my sort of thing, I didn't have the voice for that really. Another musical influence would have been the London Youth Choir - a left wing choir that went off to the youth festivals.
"It's funny that they've become of interest to people now. I went to three of these youth festivals. 53 in Bucharest, 55 in Warsaw, 57 in Moscow. Somebody in Finland, an academic, is now writing a book about youth festivals. Out of the youth choirs came skiffle really."

It was while at university that Rosselson started writing songs.

"The first song was called the Grace Kelly Calypso. What year I can't remember, but that must have been when I was at university," he said.

The songwriting became a career when in the early 60s he joined Robin Hall, Jimmie Macgregor and Shirley Bland in the band The Galliards.

"I joined the Galliards then, and that's when it all took off because we did a lot of radio, television, made records. They were all standard folk music, all like the Weavers, around the world folk songs. And that's when I started, and when the Galliards broke up, I started going around the folk clubs with about a dozen songs that I'd written, and that kept me going for a bit," he said.

It was at this point that Rosselson found himself involved in the British satire boom and David Frost anchored television programme That Was The Week That Was.

"So I used to go sing my latest satirical song to Ned Sherrin (producer of TW3), and most of the time he never used them. He liked songs where you could make it into a production, a theatrical thing," he said.
"He was keen on Broadway musicals I think. So he wanted a song where he could do something visual with. But he used a song about judges.
"And the other one was a song about the Labour Party."

This song, a parody of The Red Flag, included cutting lines such as: "We'll reform the country bit by bit, so nobody will notice it/ Then ever after, never fear, we'll sing the Red Flag once a year."


"He (Sherrin) used that one and that was funny because he phoned me up after it was transmitted and said there was a request to record that song. I said: 'Who wants to record it?' And he said: 'Well actually it's the conservative party.' So I said: 'No.' A song just as relevant up to the time of Tony Blair."

Through the 60s and 70s Rosselson made a name for himself as one of the great songwriters.
I ask about Palaces of Gold

"Martin Simpson and Martin Carthy have recorded it, and Lady Maisery, so that's one of the songs that, well, I suppose quite a lot of the early songs are still singable. Not the Toffee satirical ones maybe, but a lot of the others are," he said.

I ask about Barney's Epic Homer, which is one of my favourites. It tells the surreal tale of a conveyor belt factory and how he frees his mind, but possibly also goes mad.

"I think that works as a song. As I say, it's a story so not telling people what to think. Just a story. I think that I was taking a train up to Sheffield, I was doing something with Roy (Bailey).
"I was reading a book about, I think it was called 'The Worker and the Worker's State'. It was about hunger in fact. And it occurred to me upon reading it that a worker and workers' state is not much different than a worker in a capitalist state.
"Anyway I got to thinking about work, that's what it was about. What is work? And I started writing the song in the train. I actually wrote it quite quickly I think. So it was about trying to inspire, because now I suppose you could say if you're not like George Osborne talking about people who lie in bed with the curtains drawn and won't open them. Unless you are actually in a job, like however awful the job is, that's the only thing that counts as work. So people who maybe are painting or writing poetry or decorating the house or whatever they do. Unless it's for money, it's not work."

Rosselson said Barney becomes a "gardener, he plants flowers, and he obviously is mentally challenged as they say. And when I sang it in the folk club, somebody did object and said she paid taxes and he wasn't working. And I said, well he is working actually! He's just not getting paid for it. He's working very hard if he's there in rain and sun, planting and digging".
He told me he has virtually stopped writing songs.

"I wrote one song in 2017 and I've written one song in 2018. So well yes, not exactly prolific is it. I think the external and the internal impulse have gone largely but not entirely.
"If I think of something that I want to write about I'll probably write about it. Some of those are story songs with obviously a relevance to what's happening now."

Song Of The Old Communist