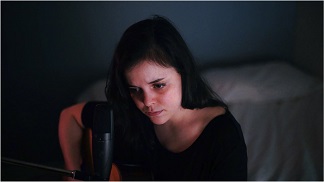 Hailing from Edmonton, Canada and now a Londoner by choice, singer-songwriter and all around inspiring artist Ariana Brophy has just summoned her musical sisters and launched her project FemFolk, an ambitious and exciting new platform for the folk community all around the United Kingdom.

FemFolk is an organisation that exists to promote women, non-binary, trans, and intersex musicians that are new or emerging in the broad stream of UK folk music. This includes everything from Traditional Folk music, to Bluegrass and Americana, to contemporary singer-songwriters, and even Folk Rock and other folk genre crossovers. FemFolk runs monthly events, provides press photos, performance and music reviews, and facilitates events for live video and interview sessions in collaboration with the Piano Factory Sessions. By providing these opportunities and sharing them with the artists, FemFolk eliminates much of the cost associated with starting out as a musician, giving FemFolk artists the promotional material necessary for marketing their work - and allowing them to focus on the music itself. Like every true creative, Ariana understands and promotes the value of close collaboration with others in order to encourage and bolster the successes of those around her.

My first chance to work alongside Ariana happened on the set of the short film "I had a King". A Laurel Canyon-inspired story, it tells the tale of an estranged couple, both of them musicians, meeting again years after tragedy altered their lives forever. Not only did Ariana embody the character of Lisa completely, she also composed the heartbreaking original song "Her Name". Written from the perspective of the film's protagonist, Lisa, "Her Name" encompasses the character, and became a crucial part in the film. "Her Name" is being officially released within the next couple of weeks, Ariana's latest single since the launch of her third EP, "Naked", which came out in June of 2019.

As its title suggests, "Naked" is an honest, open and vulnerable look at Ariana's active mind and sensitive nature. The best part of listening to this EP manifested when, after already being familiar with the songs, the opportunity arose to attend a live performance, where Ariana performed them onstage, introducing what the stories were actually about: Vast, open roads in the middle of snowy Canada, the comfort of new love, heartaches past and present… all of them shared with a lovely lightness of being and with funny moments in between. (She loves her puns). In contrast, "Her Name" uses sweeping strings and picturesque lyrics to tell of the tragedy behind a marriage's failure, and the forced growth of a woman alone.

A seasoned performer, Ariana has played on main stages at a number of festivals including Edmonton Folk Festival (2016), Canmore Folk Festival (2015, 2016), Elsted Summer Festival (2019), New Moon Folk Club (2017), as well as successfully touring four times across Canada, which is no small feat. Since her arrival in the UK in 2018, Ariana has graced the stages of a number of folk venues, including the Green Note, Sofar Sounds, Folkroom by the Sea, participated twice in residencies at Halsway Manor, the National Centre for Folk Art, and will be joining the lineup of Home Farm Festival in June this year.

With FemFolk "newly flourishing on the UK folk scene", Ariana hopes to use her years of experience as a musician in Canada and the UK to facilitate exponential growth for those early in their careers. FemFolk's upcoming monthly Workshop Series aims to cover topics such as songwriting, tour planning, press kits, performance, and music theory, while supporting women and non-binary artists from across the spectrum of musical genres.

As far as her own musical path, Ariana is in the process of writing her first full-length album, which draws upon her experiences in the UK to include elements of traditional folk music, jazz, vocal harmonies, and storytelling. It will no doubt be the beginning of many other adventures as she continues to move audiences wherever she goes.

Eduardo Arcelus is a writer, actor and filmmaker based in London.

A Bit Of Fresh Air