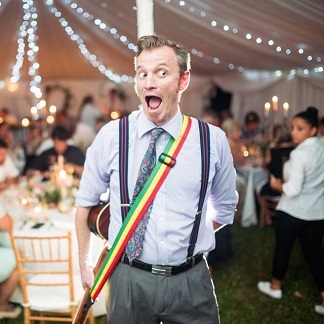 Listen Up - Dave Starke
A look at some of the emerging artists of the acoustic roots & folk circuit, this moth we focus on South African singer songwriter Dave Starke who is a South African singer-songwriter who strives to capture human moments in musical form - to sum up a whole host of thoughts and emotions using just his voice and a guitar. His music is lyric-driven, performed on guitar with occasional touches of percussion and some very haunting whistling. For Dave it's all about telling stories, so the voice is the most important instrument and everything else is there to be a support structure for the narrative. His album "Duende" was released in January 2019. His most recent album "Shifting Boundaries" was released in March 2020.

How would you describe your music?
I play folk music with occasional touches of traditional music, world music, blues and country. For me the lyrics are really important and I see myself in the mould of the old troubadours - a teller of stories set to simple musical accompaniment. I swing between nylon and steel guitars and am fond of a little piano and harmonica every now and then.

I suppose one of the most distinctive things about my sound is that I am a bass-baritone and I don't try to pretend that I'm not. I fully embrace the bottom end of my voice. In an industry that tends to exalt voices that are "higher and louder", I prefer to deliver lower and softer.

In terms of theme - I am partial to ballads particularly - human relationships offer a never-ending source of material and everyone can relate to them. I also tend to write in the first-person narrative quite a lot - I say "me", "you", "us" and "I" and that makes my songs feel very personal, sometimes even scarily intimate.

What has been your highlight so far?
I consider the fact that I get to earn a living from music to be a highlight in itself. It's relentlessly hard in South Africa, but very rewarding too. A few years ago I was asked to compose a blues soundtrack for a feature film and that was a terrifying, rewarding and exhilarating experience.

I am very proud of my latest album "Shifting Boundaries", not just in terms of the songwriting, but also because of the big emphasis I put into arranging and collaboration - I made space to work with some incredible people and it really paid-off.

Anytime that I can fill a venue with people eager to hear my original work, that is a highlight and always will be. Us songwriter types really enjoy being at the "coal-face" to see the audience respond - it's a perpetually inspiring experience.

What plans regarding recordings, video, tours etc do you have for the future?
I have just released a new album and was hoping to tour it to England and Ireland late in 2020, but have had to abandon that due to worldwide travel restrictions. For the remainder of this year I will be doing online performances and promotion with the view of resurrecting the tour towards the middle of 2021. In the bigger picture, I'd like to also tour The Netherlands and Germany, particularly Berlin.

In terms of future projects, I am busy conceptualising my next album which will be a series of duet performances of public domain music. Basically I plan to go and dig up a dozen songs from the late 1800s and arrange them to be recorded with some of my favourite industry friends. I have this pervasive feeling that music was much more open and collaborative in spirit before the "professional era" so I would like this album to have a jam-along, skiffle feel to it.

Is there anything else you would like to say or any message to our readers?
I would like to thank members of the listening public that seek out bespoke, handcrafted music. I sometimes call it "marginal music" - all the stuff that's happening in small venues, in surprising places, on the outskirts of the industry at large. Thank you - we do this for you!

Calling Out To You