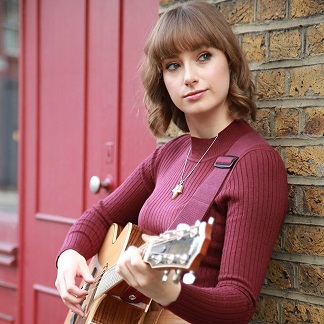 Listen Up - Anna Renae
A look at some of the emerging artists of the acoustic roots & folk circuit, this moth we focus on singer songwriter Anna Renae who is a British/American singer-songwriter giving life a musical narrative. Channelling primarily pop and folk influences, her music tells stories of life's complexities from the heart of an old soul with a wide-eyed imagination. Having graduated from the University of Liverpool in 2017 with a First Class BA (Hons) degree in Popular Music, Anna Renae's life and music have now taken flight from her hometown in Lancashire to Hampshire, where she looks upon broad new horizons.Her debut album 'Skin' was released on Friday 20th March 2020, and is available now on all major platforms.

How would you describe your music?
I honestly find it difficult to describe my music in any single way - it differs from song to song! I describe myself as a 'pop/folk' artist, as my music tends to fall into one or both of these categories. However, even my most folk-based songs can't completely be defined as such - for example, although 'Loving You Silently' has a folk-style melody and subject matter, its instrumentation is a classical string quartet! I have such a wide range of musical tastes and influences, from celtic and traditional folk music to modern indie/pop songs to 80s rock ballads - so this is somewhat reflected in my songwriting. The focal point of my original material is always the lyrics - I write songs based on very personal experiences and things that have inspired me, and so the instrumentation is often built around this, with the lyrics as the centrepiece. I therefore don't necessarily begin writing songs with a specific genre in mind to sound consistent with my previous work - I write each song very individually, and create a sound based on the feeling related to the subject matter of the lyrics. It is widely understood that in order to build a fanbase, musicians should try to create a particular 'sound' that listeners will associate with them, however I actually find this quite limiting - I enjoy listening to and performing such a huge range of music, and so I'd like to be able to explore different genres as a songwriter too, which I definitely plan to do for future releases.

What has been your highlight so far?
Honestly, the release of my debut album 'Skin' on 20th March this year. Everything I've done musically up until this point has been leading and building to this moment, where I would officially release my own album. This first release is the culmination of every decision I've made in my life that has ever led me to pursuing music, from my first guitar lesson at around 7 years old to studying music at University - so it's such a feeling of release, knowing that these songs are now finally out in the world, as my first showcase of what all of these decisions have created. The response I've had to the album has been unbelievable - I could not have imagined my first release going any better, even with the world in quarantine and having to have my launch party online! The incredibly kind words I've received from so many people, and the amazing album reviews and radio plays that I've had, have without a doubt been the highlights of my career so far.

What plans regarding recordings, video, tours etc do you have for the future?
At the same time as I recorded my album, I also recorded 5 other songs that I plan to release on an EP, potentially either early next year or even towards the end of this year. I am keen to release these songs fairly soon, as they are more of my 'older' songs, written around the same time as the songs on 'Skin' - and so I'd love to have all of this back-catalogue out there before I can then move onto my more recent material that I've written in the past few years. Beyond this EP release, I have at least another album's worth of songs finished, and I am writing new music constantly - so I have a lot of plans regarding future releases! In terms of performances, I did have some exciting gigs (including festivals) lined up for this spring/summer, however of course these have all been postponed due to the Covid-19 quarantine. Some are only postponed to the end of the year, so hopefully from around September onwards I will be a busy bee - and when I do get to perform at the rescheduled festivals, it will undoubtably make next summer one to remember!

Is there anything else you would like to say or any message to our readers?
I would firstly like to say a massive thank-you to everyone who has supported me in my journey so far, whether that has been through buying my album, letting me perform at events/venues, playing my music on radio shows, or simply liking/sharing my social media posts. Every little action goes such a long way towards promoting independent artists like myself, and every kind word or shout-out makes me so happy and encourages me to continue creating more music!
I would also just like to encourage anyone to get involved with music-making in any way they feel - music is a beautiful art form that does not require an 'end-goal' of being a professional musician. There is no requirement, in fact, to ever perform for anyone else - music simply creates a private channel of expression for the things in life that are otherwise ineffable. Musical composition involves the whole self, connecting the physical output of instrumental sound with the inner ramblings of your mind and soul; I hope that anyone, particularly during strange times such as we have collectively experienced this year, could use this wonderful medium to, like myself throughout my life, find catharsis.