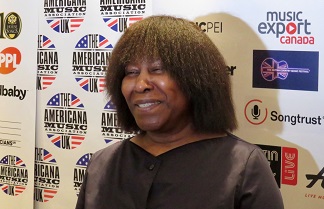 The 2020 Americana Music Association UK conference and showcase concerts in Hackney and Awards at the Troxy show this musical genre is thriving. This year the three day event at the end of January saw 75 artistes from around the world performing as well as industry talks and sessions.

The showcase events included established performers such as US songwriter Amy Speace and Pete Gow, but also up and coming stars such as Lucy Grubb, Demi Marriner and Izzie Walsh.

As well as homegrown, US and European talent, this year's event came with a truckload of brilliant Canadian performers such as Irish Mythen, Union Duke, Lennie Gallant, Dennis Ellsworth and Megan Nash, playing showcase sessions at the Moth Club in Hackney. Megan, who is from Mortlach, Saskatchewan, spoke to me after her set.
"The audience was very warm and very receptive. It was so much fun," she said.

The final night of the conference was the AMA awards ceremony at the Troxy which was hosted by BBC Radio Two legend Bob Harris and saw big performances by a host of stars.

The big winners were Yola, who won UK artist and album of the year and Elles Bailey for UK Song of the Year and Amy Speace who won best international Song of the Year. Amy told me that the song was written while pregnant with her son and at a time she was wondering if she could continue her music career.
"I thought this would be my last hurrah," she said.

But she said she was so pleased to see the great reaction to her winning title song of the album Me and the Ghost of Charlemagne.
"It shows the more you let go, the things that you hope for, show up. I feel very grateful," she said.

Christopher Turpin, of rising stars of the Americana scene Ida Mae, said he loved being able to perform at the AMA UK awards.
"I really enjoyed it, though we were a bit nervous. But I love these shows where there is a variety of artistes, like the old variety shows of the 20s," he said.

Also performing at the awards ceremony was the wonderful American artiste Danni Nicholls.
"It was amazing. I was buzzing with excitement. It's not every day you have the backing of a seven-piece choir," she said.
"I'm so grateful to be part of it."

"It was a super chance to network and meet musicians of our genre from all over the UK, Europe, the US and Canada.

"I've left the conference with a head full of ideas read to take on this second album with."

(Nic Rigby is a member of band Nic Norton and Alice Morell (nicnortonmusic.com or @nicnortonmusic on Instagram))