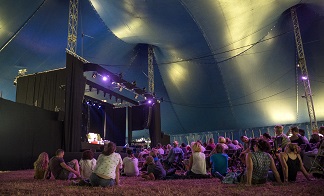 Underneath The Stars Festival

Festival number six, or perhaps so as not to confuse things with another event, the sixth running of the Barnsley based Underneath The Stars, saw them take on the might of the Cambridge Folk Festival over the same weekend and still manage to sell out. It may have clashed with Cambridge yet for those who carefully study their bills as opposed to loyally attending their favourite event, several artists were playing both festivals.

In what has now become a typical UTSf line up, there was plenty of opportunity to get revved up. Lots to satisfy every taste and of course, the opportunity to discover something new. It may have been in the form of one of the (local) up and coming artists such as Toby Burton who had the honour (maybe a slightly daunting one) of opening the festival, Leed's Shadowlark, the vast ranks of the Barnsley Youth Choir or the very local and very regular ('Bjorn' could hear The Proclaimers from his back yard) Bar Steward Sons Of Val Doonican. It may have been in one of the acts from overseas such as the eye catching Baskery from Sweden or the self depreciating humour of Old Man Luedecke from Nova Scotia whose unpretentiousness belied some seriously impressive banjo playing or maybe get entranced by the intimacy as The Local Honeys (not so local being from Kentucky) gathered round one microphone. And then there was Le Vent Du Nord…more of which later. 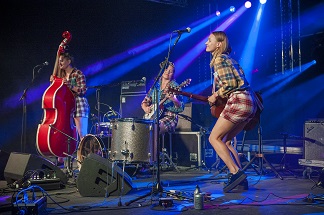 There are the artists who add a premiership squad style strength in numbers to the bill, Biscuithead And The Biscuit Badgers proving that if it was good enough for Peter Gabriel and genesis in 1972, sticking a fox's head on is always good for catching the eye. Talking of which the likes of hope & Social, the three sisters from Sweden - Baskery - and CC Smugglers proved unmissable. Anyone opting for a visit to a workshop or food stall visit as an alternative would have been kicking themselves. The classy art folk of The Unthanks, playing in their extended format for the first time in a while was in direct contrast to the vibrant exuberance and cross-cultural, cross-genre, cross everything of K.O.G And The Zongo Brigade, who were as exotic as the sound. Maybe more so although what the dyed in the wool folk fans may have thought… we also saw the two sides of Sam Kelly; doubling up on Saturday with Ruth Notman (joined by Damian O'Kane and Duncan Lyall) for a set of delicately delivered and arranged songs after letting his hair down earlier with his trio. Although four men down from his full Lost Boys band, Sam, Jamie Francis and Evan Carson between them blew up a storm of equal weight particularly on an acoustic guitar/banjo/drums typhoon on 'Greenland Whale' and Dylan's 'Down In The Flood'. 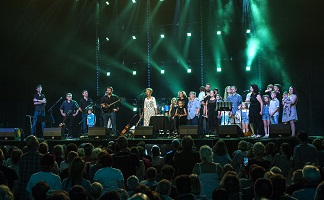 Perhaps for many though the highlight would have been to witness the mass O'Kane family gathering for an genuine one-off/one-of-a-kind performance with the whole immediate family, big enough as it is, joined by several other family and friend members for an often joyous, mostly emotional occasion. Sets of lively and thrilling tunes, a duet with Kate on 'Banks Of The Bann' and THE festival highlight in a big band rollicking and swashbuckling 'The Breaking Of Omagh Jail' all ended with a mass singlaong to 'Molly Malone'. One of those occasions you can say "I was there."

But UTSf isn't all about the music; the audience with Ruth Jones (Stella, Gavin & Stacey etc) was thoroughly enjoyable and her signing attracted probably the biggest queue of the weekend and if she's ever in need of any sitcom inspiration, she need look no further that the Kate and Sal Show that's now turned into a regular weekend highlight. The 2019 version had all manner of shenanigans from musical interludes to sitcom styled sketches and a new cocktail named after the local village Kexborough - Kex On The Beach….

The big name headliners for 2019 saw a party going on from The Proclaimers, doing what they've been doing now for decades and surprising us with how many recognisable songs they have aside from the hits. Not everyone's cup of tea given the variety on the bill but as a friendly first night headliner, hard to argue. Billy Bragg did what Billy Bragg does with an assortment of topics and individual that came under scrutiny - Boris naturally, Morrissey and the climate, but the best had to be "political correctness. It does not exist…it does not exist," which will have been reassuring for the likes of the Bar Steward Sons Of Val Doonican who had their packed audience shouting out "nice cock!" and "great tits!" during their usual brilliant set). A cross between what felt like a party conference (lots of bold statements followed by applause), his latest incarnation as purveyor of country Americana and his good old self - 'The Milkman Of Human Kindness' and 'The World Turned Upside Down'(!!) taking us back to those back to basic days of scratchy electric guitar and cockney sparrer. Kate Rusby of course typified what BB meant when he talked about empathy and the way music should evoke an emotional response, in her songs of moons and stars (and a drink or two). 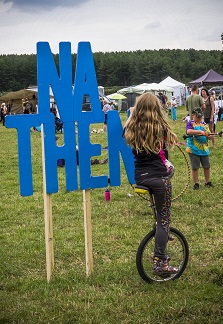 If that wasn't enough there were late night parties for those with the stamina, most notably from Talisk on a final night where no-one was going to be defeated by a torrential downpour and a tent of mud. The not quite so new location still allows the audience easily enough time to get from one tent to another and watch every musical offering and actually for anyone on a musical journey, it's a shame that there's less opportunity to take in the various events going on elsewhere on the site but that's what makes UTSf such a family friendly festival.

So in the final reckoning what will stick in the mind from 2019? After much deliberation, here are a final three stellar highlights of the weekend, with apologies to the Bar Stewards, Hope & Social and Ruth Jones who missed the podium by a whisker.

1. The O'Kane family playing 'The Breaking Of Omagh Jail'; one that almost didn't happen as Mrs O'Kane was announcing the last song before a call from the stage side reminded them they had more time and threw this one in. A travesty of we'd have missed it.

2. The Sam Kelly Trio, dropping over half of the Lost Boys yet making a noise that was twice as loud, taking off with 'Greenland Whale' and despite everyone going ape for 'Sultans Of Swing' and 'The Chain', the covers of an incendiary 'Down In The Flood' and 'Gallows Pole'.