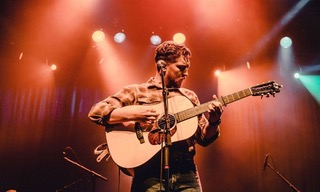 He wears a hoodie - no Stetson, embroidered cowboy shirts nor pointed cowboy boots are on show - and that's because Tyler Childers only needs his presence, powerful music and his potent lyrics to display why he's riding the crest of a mighty big country wave at the moment, and most deservedly.

The unassuming, young dude from coal mining, Lawrence County in Kentucky was in scuffed up brilliant form at this sold-out Celtic Connections' show in Glasgow's East End. He is workmanlike - and I mean that kindly as a compliment - as he doesn't engage in pomp or playing to the gallery.

He is focused solely on the songs and the red-hot delivery he achieves, ably buoyed by his tight-as-hell, five-piece band, The Food Stamps, one of the best I've heard in recent times.

With all this in place, he successfully drapes his show in a cloak of twang and rock, with bluegrass/rockabilly tints and a jaw-dropping solo spot featuring four songs that were emotional and flawless as the stage smoke cleared.

Nose To The Grindstone, for one, is as immense as it is chilling with Childers singing: "Daddy I've been tryin' / I just can't catch a break / There's too much in this world I can't seem to shake / But I remember your words, Lord, they bring me the chills / Keep your nose on the grindstone and out of the pills." Many around me in the crowd were word perfect, too.

He was grateful we had picked his show from the many in the programme the same night, but you didn't want to miss this experience where grit and open-ness combined to form a disarming display of immediacy.

A jaunty Bus Stop from 2019's Sturgill Simpson-produced album, 'Country Squire' is an early pleaser with a stomping and bouncing House Fire from the same record hard on its heels.

Two tracks from 2017's release, 'Purgatory' are real crowd pleasers. Feathered Indians is impish and saucy, embellished by flowing fiddle and pedal steel, while Honky Tonk Flame is already a standard, spotlighting in song real-life country, where struggles still have to be overcome, and hope and salvation are sought, if possible.

If Childers' storytelling and songs continues in this richest of veins then we have musical treats to look forward to for some time to come, thankfully.

Support act, The Local Honeys - Linda Jean Stokley and Montana Hobbs - are from the foothills of the Appalachian region and have "dedicated themselves to the preservation of old music and the creation of new music."

Their set sparkled with composed musicianship, fine harmonies and witty chat. No surprise they had a 'sold out' show of their own to look forward to.