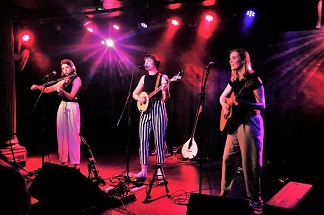 Mighty oaks from little acorns grow, runs the saying, and that is certainly true of a band who have made great strides in a short space of time. Following a backstage jam session after a show in York in the autumn of 2017 Bella Gaffney and Polly Bolton realised they had a sound, and a shared interest in transatlantic music, that was worth exploring further which led to a well received EP "Bella and Polly". After adding cellist Sarah Smout and then fiddle player Holly Brandon to the line-up the decision to become a band was made and so The Magpies were born. March 2020 will go down in history as the month the world changed but just before the lockdown arrived they released their début album "Tidings" to a large crowd at the iconic Water Rats venue in London, and I was fortunate enough to be there.

Opening the evening Hannah Scott http://www.hannahscott.co.uk/ was somebody I'd heard of but not seen before. She grew into her set and impressed with songs, some very personal about her family, based around direct lyrics and a voice that could cover the range. Her higher registers were particularly good. There's a new album planned for sometime this year and lovers of nu-folk will enjoy it based on what I heard on the night.

The Magpies, for those not fortunate to have seen them before, play a mixture of songs from both sides of the Atlantic as well as tunes sets and their own compositions. It gives them a wide range and allows everybody a chance to shine. On the night they were in a trio formations as Sarah was unable to attend but they lost none of the drive and sparkle that makes their performance so exciting to watch. Opening with a set of tunes they got the feet tapping and heads nodding and there was a real buzz of anticipation going through the crowd.

The first song of the evening was "The Two Magicians", well know to any folk audience but Bella's dry Yorkshire humour in the introduction made the most of this fantastical tale of the inevitable lusty blacksmith and his pursuit of a lady, aided by both of them just happening to be shapeshifters. That then segued into Liz Carroll's "Catharsis". Although this was originally as a fiddle piece The Magpies combine Holly's fiddle with Bella's mandolin and that combination of sustain and staccato is very typical of their musical style. It gives a real sense of immediacy to their music. 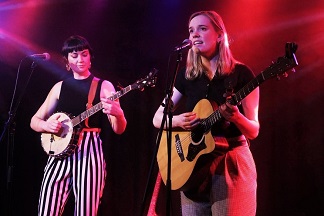 Although a band, the individual talents were also well showcased with Bella's beautiful "No More Tears" being followed by Holly's "Foss Island", although forget the romance of beaches and windswept shores. Foss Island is a retail park she can see from her home in York.

That's one of the beauties of live music, of course; you get the stories behind the songs and the interplay between the performers. Holly isn't originally from Yorkshire and is doing all she can to avoid picking up the accent despite the best efforts of the others. Holly also raised a laugh as they were tuning between songs. She was asked if she was ready and had to sheepishly admit she was only false tuning to look busy.

Tradition was well represented with "Ten Thousand Lies" from the USA and an incredible version of "The Galway Shawl" which shows even the most familiar of songs can sound fresh and new in the right hands. That was a lovely surprise.

Ending the evening "Balls To The Wall" with its high tempo and energy rising and falling to ensure that anyone who wasn't already clapping and cheering would soon join in. For me the highlight of this incredible piece is Polly's masterful mandolin. The encore was inevitable, and thoroughly deserved. "Polly On The Shore" is a classic Magpies track everyone knows and loves. It was a fitting end to the evening.

The launch tour, of course, is on hold but will continue at some stage and I'm eagerly awaiting another chance to see a young, dynamic band who are already great favourite at festivals around the country. The album is currently due for official release on the 5th June and is certainly one to get hold of. As example of the best in harmonies, cross genre folk and country, and all female bands making a real mark it will be very hard to beat.