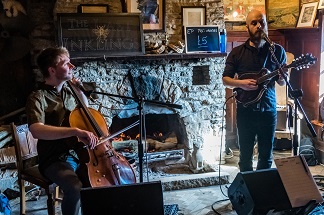 This was supposed to have been the start of a stint of live gigs, both for me and The Last Inklings. Like most people jobs and family have a call on my time running Fatea, doing a radio show etc. leave little time for going to gigs, the sacrifices we make, but this March was going to be different, had a number of gigs lined up and the calendar cleared to attend.

Similarly The Last Inklings had an EP launch gig set for April, a short tour and SpringFest at the HalfMoon there were going to be a number of opportunities to catch up, so the temptation just to watch and enjoy the duos debut gig at one of my favourite venues, the legendary Square Compass, without thinking about camera angles and writing reviews was high. If it hadn't been a nice day and the springtime Dorset countryside so beautiful, might not even have had the camera with me.

The Last Inklings, named after the Oxford literary group that included Tolkien amongst it's number, are the dual phoenix that rose from the ashes of Kadia and now consist of cellist Leonardo MacKenzie and multi-instrumentalist David Hoyland, with vocal duties shared..

The music room in the Square & Compass, is small and dark, it was a quarryman's pub, that subsequently attracted the likes of Enid Blyton and Augustus John, coincidently more references to the style of folk that The Last Inklings have fused into their core; it is also a venue that boxes above it's weight when it comes to music and the quality of it's beer and pasties have become legend to music fans and walkers alike. 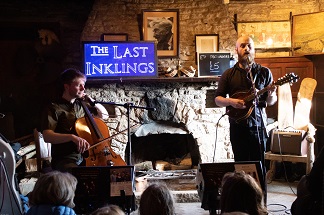 The literary reference scattered in my overly long intro serve as a good reference point for The Last Inkling's sound. Folk often has a reputation for the dark, murders, ghosts an whilst that is a reference point, mystery and magic are more valid, there is also a degree more sophistication, The Last Inklings are alchemists rather potioners, striving to find the gold in the lead, striving for an intricate excellence, that on this outing they are definitely well down the road for.

The music deceives, it seems simple enough, it is only two instruments after all, similarly two voices, but it's the interplay, the move from harmony to opposition and back again, that give the hints that there is a lot more to this than you expect. Simple folk tales about "The Telling Of The Bees" draw you into thoughtful reflections, but again there's more than that it's like you are constantly exploring the songs.

You heard a lot more of David now his voice working dynamically alongside and off of Lee's. It's really is and interesting combination. All of which is making The Last Inkling's sound a bit like a study piece, they are definitely more than that. Whilst dark and mysterious, the songs abound with life and intrigue and it's neatly balanced off with between song banter that is both light and witty.

The debut EP "Alchemy" is imminent, as is the review, but whilst it's going to be a while before you get to see them in the flesh so to speak, you owe it to yourself to keep an eye on the website, because when touring starts again, this one will be clearly marked as a good night, or afternoon, out and well worth their name up in lights.