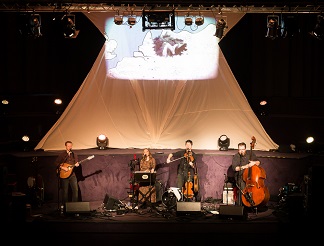 The Mayflower and its companion ship, the Speedwell, left the port of Southampton in August 1620, nearly 400 years ago. As we headed to the concert at Central Hall, many of the buildings and streets we passed would have still been familiar to those people centuries ago.

Through Seth Lakeman and his new project, A Pilgrim's Tale, the names of those who left on the historic voyage so long ago returned once again to Southampton, one of many dates at key locations linked with the voyage. 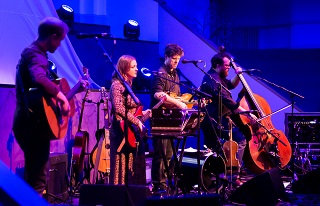 The CD itself is incredible in its scope and execution, and the live show brought the magic of the recording to life with the recorded narration delivered perfectly by Paul McGann and the additional projections. The musical story was punctuated by the pre-recorded McGann, driving the narrative forward and fleshing out the impressions and storytelling contained in the songs, whilst above the performers, on a series of sail-like screens, the projections guided the audience across the map, mirroring the journey.

Anchoring the spoken word within the context of the concert, the musicians created sympathetic soundscapes beneath the words. The musical performances were flawless, and closing your eyes you could easily believe you were listening to a recording, testament to the skill of the quartet. They produced expansive textures, aided by the depth of the double bass from Ben Nicholls. The reedy harmonium played by Alex Hart contributed to sustained dreamy soundscapes. A captivating singer, the moments of harmony with Lakeman over stripped back accompaniment were exquisitely executed. Benji Kirkpatrick's bouzouki was key in evoking the sound of a different era along with the fiddle.

Within the story itself, the additional elements of fictional visions and personal experiences imagined by Lakeman were a sensitive addition to the historical points and served to root the tale in human experience, bridging the gap of four centuries, and reminding us that it was flesh and blood people that endured the dangerous crossing and inhospitable winters in a land so far from their home shores.